New Book Gazes Skeptically at the Star of Bethlehem 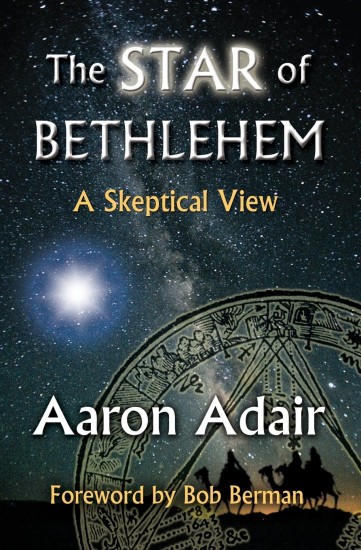 The Star of Bethlehem, as told in the Bible and other myths, did some impressive things that stars don’t normally do, moving in different directions, hovering in one spot, oh, and heralding the birth of the messiah. But what, if anything, was really going on?

Kimberly Winston of the Religion News Service recently interviewed Aaron Adair, the author of a new book on the subject, The Star of Bethlehem: A Skeptical View, and they run through some of the theories, ruling many of them out. Comets and supernovae, for example, don’t fit the picture. But one idea that sticks out to me, and also to Winston, is that the “star” may have been something a little more mechanical in nature:

Q: My favorite is that the star was actually a UFO. Why would anyone believe this theory?

A: It actually fits the description of the star in the Gospels. A UFO can move around and look like anything it wants to, given sufficient technology. It could lead people to a location and hover over a particular spot and say, for example, “Eat at Joe’s.” And sufficiently advanced aliens could have communicated with the Magi. But all this just means it is imaginable. Of course the problem is, we don’t know if there are intelligent aliens out there or whether they traveled to Earth to mess around with a few local Palestinians.

I just love that from a skeptical perspective, aliens can’t be ruled out entirely. But can they ever be??? Ahem.

Anyway, just in case you’re worried, Adair says he’s not trying to overthrow Christianity with his book. But I think Fox News would likely see right through that ruse. And Answers in Genesis has it all cleared up anyway. Not happy with the violation of basic physics? No worries:

[N]o known natural phenomenon would be able to stand over Bethlehem since all “natural” stars continually move due to the rotation of the earth.1 They appear to rise in the east and set in the west, or circle around the celestial poles. However, the Bible does not say that this star was a natural phenomenon. . . . Of course, God can use natural law to accomplish His will. In fact, a biblical definition of natural law is the way that God normally upholds the universe and accomplishes His will, but God is not bound by the laws He created; He may (and does on occasion) temporarily suspend those laws when He has an important reason to do so.

Read the whole interview here, and the book is here.

December 27, 2013 Footloose 2013: Krumping, Tutting, Flexing, and Turfing Are The Devil's Way To Lead Your Soul to Hell
Browse Our Archives
What Are Your Thoughts?leave a comment