This Guy’s Running for Elected Office in Texas, So He Just Trashed Atheists in His Latest Campaign Ad December 24, 2013 Hemant Mehta

This Guy’s Running for Elected Office in Texas, So He Just Trashed Atheists in His Latest Campaign Ad

Sid Miller, a Texas Republican running to become the state’s Agriculture Commissioner, has to beef up his conservative credentials, so he just released a holiday campaign ad that includes a jab at atheists. Because I guess that’s how you get elected as a Republican in Texas. 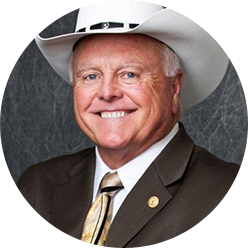 Howdy, folks. This is your conservative candidate, Sid Miller, running for Texas Agriculture Commissioner. To all my Christian brothers and sisters out there, I’d like to wish you a merry Christmas.

To all my Jewish friends, I hope you had a happy Hanukkah.

And to all folks out there that are atheists [pause], goooood luck.

Huh. We’re not even his friends, I see…

This is what it takes to get elected. No mention of his actual credentials for being Agriculture Commissioner (other than his ability to wear a hat). Just him using atheists as a punchline. Because that’s hilarious.

Granted, he was never gonna get our votes, anyway, but how can any candidate — even one from Texas — get away with putting down an entire group of people, even for the sake of a(n awful) joke? It’s one thing to tell that joke in church, but when you’re running to represent all the people in the state, including atheists? Despicable. Will his next campaign ad mock Hindus and Muslims?

By the way, did you see the fine print at the beginning of that ad? “Paid for by the Sid Miller campaign, Ted Nugent Treasurer.” I don’t think his conservatism is in doubt here…

December 24, 2013
Of All the Places an Atheist Display Would Be Vandalized, This One Caught Me By Surprise...
Next Post

December 24, 2013 Congressman Proposes Legislation to Protect Christians from the 'War on Christmas'
Browse Our Archives
What Are Your Thoughts?leave a comment