Church Group Prays For Addicts, ‘Helps’ Them Even More By Asking People to Narc On Them to SWAT Unit December 24, 2013 Terry Firma

Church Group Prays For Addicts, ‘Helps’ Them Even More By Asking People to Narc On Them to SWAT Unit

While skimming news headlines on Google, I swear I thought this one said

Church alliance pays for those with drugs, alcohol addiction.

Such charity of the financial kind would have been refreshing. Alas, it turns out that I missed an “r” and that the church team is praying — not paying — for addicts to get help.

The initiative would scarcely have been worth mentioning in this space if it hadn’t been for the final paragraph of the piece.

The group passes out signs that carry the logo Praying Against Drugs and Alcohol to interested community members. The phone number listed on the sign, (606) 836-0442, connects callers with the FADE Drug Task Force, where they can report drug activities or get information on where they or others they might know can get the help they need to deal with addiction. 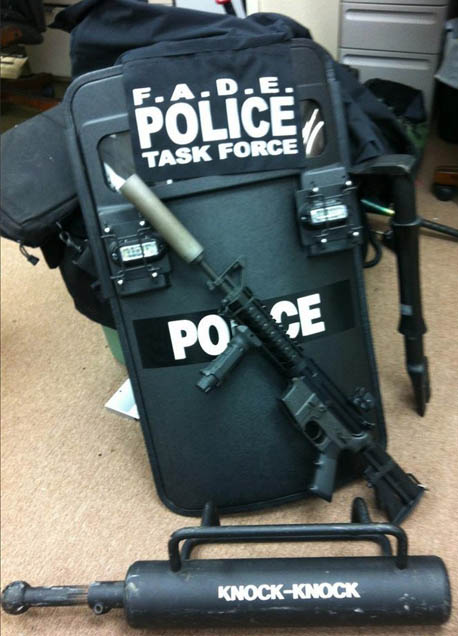 FADE Drug Task Force operates in Greenup, Carter and Lewis Counties and is comprised of officers from the Flatwoods, Russell, Raceland, Vanceburg and Olive Hill police departments and the Carter County Sheriff’s Office.

As the picture above (from FADE’s Facebook page) helps make clear, FADE is a team of armed-to-the-teeth, battering-ram-wielding drug warriors, who live for putting drug abusers behind bars — even non-violent ones who appear to be guilty of nothing more than a marijuana “crime.”

“It isn’t about pointing fingers,” King said. “The Christian faith is about compassion and love, and we want to let people who have become addicted to alcohol or drugs know that there are people who care about what happens to them.”

I don’t begrudge King his prayer group — it is as harmless as it is useless. But for the pastor to make drug abusers stare down the barrels of a SWAT team’s submachine guns, while selling himself to the local press as a great Samaritan who just aims to spread “compassion and love,” is to make an outright mockery of those virtues.

December 24, 2013
Dragnet: 60 Years Ago in Los Angeles, the Baby Jesus Disappeared and the LAPD Worked the Case Tirelessly
Next Post