In Iceland, Construction Projects Are Being Held Up Because They Might Hurt the Elves. (Seriously.) December 23, 2013 Hemant Mehta

In Iceland, Construction Projects Are Being Held Up Because They Might Hurt the Elves. (Seriously.)

I don’t know how to put this any more bluntly: In Iceland, a lot of people believe in elves. Like, more than half of them. And these Huldufólk live in rocks.

If this were just a silly belief, we could leave it at that.

But construction projects are being delayed in the country because protesters don’t want the rocks these magical elves live in to be destroyed.

Dear god, I can’t believe I just wrote that sentence… 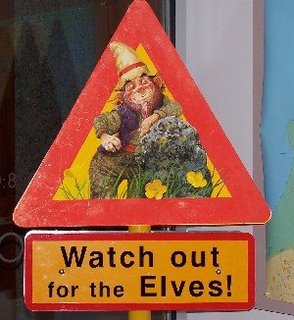 Elf advocates have joined forces with environmentalists to urge the Icelandic Road and Coastal Commission and local authorities to abandon a highway project building a direct route from the Alftanes peninsula, where the president has a home, to the Reykjavik suburb of Gardabaer. They fear disturbing elf habitat and claim the area is particularly important because it contains an elf church.

The project has been halted until the Supreme Court of Iceland rules on a case brought by a group known as Friends of Lava, who cite both the environmental and the cultural impact — including the impact on elves — of the road project. The group has regularly brought hundreds of people out to block the bulldozers.

Why the hell is this an issue? If there are environmental concerns about the project, let’s hear them. If you have to bring elves into the debate, you’ve lost the argument. It’s like Godwin’s Law for elves. (I call it Keebler’s Law.)

There’s gotta at least be some rational basis for this belief, right? One professor tried to make sense of it:

Terry Gunnell, a folklore professor at the University of Iceland, said he was not surprised by the wide acceptance of the possibility of elves.

“This is a land where your house can be destroyed by something you can’t see (earthquakes), where the wind can knock you off your feet, where the smell of sulfur from your taps tells you there is invisible fire not far below your feet, where the northern lights make the sky the biggest television screen in the world, and where hot springs and glaciers ‘talk,'” Gunnell said.

“Everyone is aware that the land is alive, and one can say that the stories of hidden people and the need to work carefully with them reflects an understanding that the land demands respect,” he added.

Meh. Even he’s grasping at straws he, trying to rationalize something that makes absolutely no sense.

And this isn’t the first time major road projects have been delayed because of the belief in the invisible. The New York Times published a story about it in 1995:

This town, a port on the outskirts of Reykjavik, prides itself on its unusually high elf population. Tourists are invited to tour the known elf locations, including a large rock whose reputation as an elf habitat meant that a nearby road was diverted some years ago so as not to disturb its unseen residents.

Elly Erlingsdottir, head of the town council’s planning committee, said that made sense to her. Recently, she said, some elves borrowed her kitchen scissors, only to return them a week later to a place she had repeatedly searched. “My philosophy is, you don’t have to see everything you believe in,” she said, “because many of your greatest experiences happen with closed eyes.”

At least belief in elves has, at worst, just delayed some construction projects. If it were America, I promise you evangelicals would be using those elves to justify a ban on gay marriage and a need for easier access to guns.

The best line, though, came from environmentalist Andri Snaer Magnason:

“Some feel that the elf thing is a bit annoying,” said Magnason, adding that personally he was not sure they existed. However, he added, “I got married in a church with a god just as invisible as the elves, so what might seem irrational is actually quite common” with Icelanders.

So how did this phenomenon even begin? An article in The Atlantic attempted to get to the bottom of that and found a starting date for the myth:

According to Árni Björnsson, the former director of the ethnological department of the National Museum of Iceland, widespread belief in elves is “a rather recent myth” which arose in the 1970s, and flourished in part because of “the hippie culture.” While he acknowledges his country’s rich history of folktales, it doesn’t prove “that people really believe in them, no more than they believe in the real existence of Tarzan or Harry Potter.”

Under his theory, most of the “gossip” about people believing that elves interfere with construction projects dates back to a single story about “a clumsy but merry bulldozer driver,” who, in the summer of 1971, broke his machine and some pipelines while moving rocks on the outskirts of Reykjavik. He attempted to explain the accident by arguing that there were elves living in the rock. “No one had ever heard about elves in this rock before, but his comment made headline in a newspaper, and the ball began to roll,” he said in an email. The story gained traction in the 1980s, partly due to his assistance.

No matter the origin, Iceland, come to your senses. You’re better than this. Stop making America look like a bastion of rationality.

(Thanks to Kiel for the link)