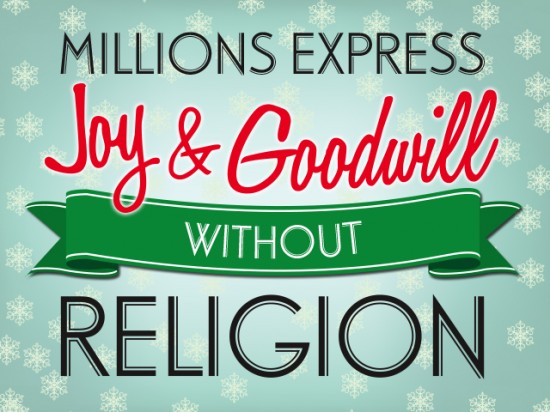 My organization, the Center for Inquiry, is capping off its Living without Religion campaign with one last ad in Times Square this week, with good wishes for the the New Year. It’s a 15-second electronic billboard ad, which you can see below, with two “slides” saying, “Millions express joy & goodwill without religion,” and ending with, “Wishing you peace & enlightenment in the New Year.” (Our press release is perhaps the warm-and-fuzziest one we’ve ever put out.)

Similar to our Thanksgiving-themed ad, I particularly like that it rises above some of the shouting about the “War on Christmas,” whether it’s a secular or religious holiday, and so on. Instead, it’s directed at reassuring those who question religion that there is a big, welcoming community of nonbelievers who feel the same way they do. It also shows everyone, believer and nonbeliever alike, that the generosity of spirit (in the secular sense of the word, of course) is strong within this community. Everyone is on the receiving end of our wish for peace and enlightenment.

This last Living without Religion ad comes just as the New York Times’ Liz Robbins reports on atheist groups’ and individuals’ approaches to the holiday season, and I actually found the section about CFI’s ad kind of moving:

One recent Monday night, [CFI-NYC member Tiffany] Crespi was one of 10 young men and women from the Center for Inquiry who stood freezing on a Times Square sidewalk for 45 minutes, waiting for 15 seconds of inspiration. When the video billboard sponsored by the Center for Inquiry finally appeared on 42nd Street, pronouncing that millions of Americans are living happily without religion, the chilled audience whooped, clapped and hastily took a picture.

I like that those 15 seconds really meant something to these folks. I think that the whole Living without Religion campaign opened a lot of eyes, and most importantly, held a lot of meaning for many people (particularly, for some reason, in Michigan, where the first ads really seemed to strike a chord). Though it’s not something that gets the folks at Fox News foaming at the mouth, I think the campaign serves the crucial purpose of gently and warmly ushering in fence-sitters and doubters who haven’t yet fully “secularized,” as it were, while at the same time blowing up some stereotypes about all atheists being angry or disgruntled.

December 23, 2013
Which of These Religious Accommodations For Employees Do You Find Reasonable?
Next Post

December 23, 2013 In Iceland, Construction Projects Are Being Held Up Because They Might Hurt the Elves. (Seriously.)
Browse Our Archives
What Are Your Thoughts?leave a comment