Asshole Atheist Videotapes Himself Swearing at Nativity Scene While Announcing That He’s Going to Sue the City December 23, 2013 Hemant Mehta

Chaz Stevens is the atheist activist best known for putting up Festivus poles in Florida. Last year, he got one up at a fire station outside Deerfield Beach. This year, he got one up inside the State Capitol building (you can see it next to the FFRF sign below): 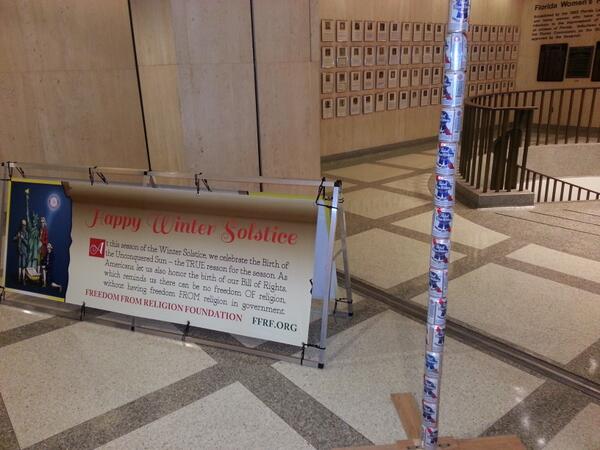 This year, Deerfield Beach said they weren’t going to allow any religious/non-religious displays at all — success! — which is why Stevens went to the State Capitol in the first place, but it seems they changed their minds. Now, there’s a Nativity scene in front of the fire station again, along with a dinosaur wearing Santa’s hat, Snoopy saying “Happy holidays,” and what appears to be a snowy ferris wheel. I guess they felt they were safe as long as there were non-Christian displays in the mix, even though the manger appears to be front and center. Why can’t a Festivus Pole be part of that mix? I don’t know but Stevens is ready to sue. And you know what? If that was the whole story, I’d be on his side.

Here’s where things get messed up.

Stevens videotaped the scene in front of the fire station while basically hurling insults and swears in its direction in order to… well, I’m not sure… to make himself look like a complete asshole even when the law is already on his side? (NSFW language)

Just crazy… the baby fucking jesus. Oh, and an angel! How fucking clever is that? A goddamn fucking angel. Jesus H. Christ. Oh, Jesus Christ, look… someone stuck their finger up the little baby’s ass. Look at this. How [Mary] convinced [Joseph] that “I’m a virgin,” ha!… Jesus Christ. People don’t fucking learn. Told ya’ I was gonna sue. Stupid. [Spits.] Shit. Oh, and there’s our little deer. Why don’t we do something about this deer? Looks like he’s got fucking herpes. And there it is. Baby Jesus Motel 6. Brought to you by the stupid people at Deerfield Beach.

His utter vile contempt for the displays is just disgusting. I want to be on his side — I am on his side, legally — but his dickishness just makes me want nothing to do with him. Even if he wasn’t stupid enough to videotape his rant, even thinking it makes it appear like he’s someone who isn’t interested in defending the law, but someone who just wants to stick it to Christians any way he can.

“Chaz Stevens, your excessive use of profanity has won me over! Thank you for your reasoned and calm demeanor, your civility has convinced me!” — said no one ever﻿

Stevens isn’t helping himself in the comments section:

I don’t know if he’ll have any legal standing here, but I do know that this rant just plays right into the narrative that atheists hate Christians, not that atheists simply want equal treatment under the law. It doesn’t help the cause he’s fighting for and it certainly doesn’t make any of us look good. Not that Stevens cares. He got his name in the news. He’s thrilled.

December 23, 2013
In Iceland, Construction Projects Are Being Held Up Because They Might Hurt the Elves. (Seriously.)
Next Post

December 23, 2013 Megachurch Pastor Okotie Shows Off Baubles, Reportedly Buys $750,000 Rolls Royce
Browse Our Archives
What Are Your Thoughts?leave a comment