Earlier this week, the Shreveport City Council (Louisiana) passed something called the “Be Fair Shreveport” Ordinance, protecting those who are LGBT from workplace discrimination. Sounds like a very logical thing to do, right? As usual, churches and religious non-profit groups were given special exemptions from the new law so they could continue being bigots within their own walls. The Ordinance passed 6-1. Everyone wins! Right?!

You know where this is going: He’s going to say he loves gay people but this Ordinance somehow takes away someone’s religious rights, blah blah blah.

Oh, we went much further than that: 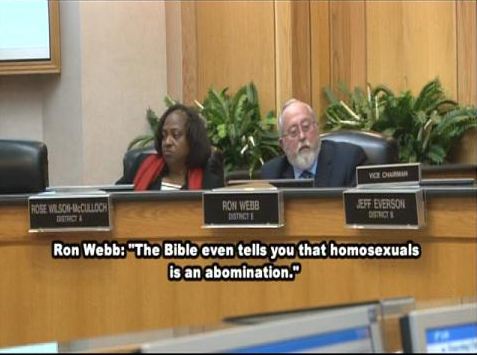 I’ve worked with homosexuals before, and you know I don’t socialize with ‘em. I don’t think that you know that we should. The Bible tells us that we shouldn’t. The Bible even tells you that homosexuals is abomination and that they will not inherit the kingdom of Heaven. And when judgment day comes around, you know that’ll be between them and the good Lord. And it’s not for us to judge. But I agree that when you were born, we’re all born in the image of God, but I believe that we do have the choice to decide what we’re going to do.

He doesn’t “socialize with homosexuals”? Why not? What’s going to happen if they get close to him? Will the gay genes magically transport over to him? I don’t know why he’d be worried about that since he believes everyone chooses to be gay, anyway…

As for the Bible… who cares? This is the local government, not his church. No legislation should be passed or voted down solely based on what a religious book says.

So what’s the non-religious reason for Webb to criticize the law?

I don’t think we should get involved in a private entity. If we wind up having someone go to the HRC, Human Relations Commission that’s wanting to be formed and file a complaint, then we’re going to go after that company and we’re going to sit down and we’re going to do whatever, and we’re going to even fining companies. And we don’t know what’s inside their minds. And you’re going to have people say I was fired for certain reasons all the time. And that doesn’t mean that that was the reason that they were fired, but just because they’re a homosexual or gay or whatever, they can say that and then that means that’s what it was. And I’m against that.

In other words, if gay people get fired, they’re always going to say they were fired for being gay. Even though our court system says you have to have proof to move forward with those claims, and even though there are non-discrimination clauses in place for things like race and gender and Webb has no problem with any of those laws.

Webb called for a repeal of the anti-discrimination ordinance at a special work meeting on Friday, but once he realized he was completely outnumbered, even he tried to table the discussion. To their credit, the other council members elected to call for a vote on Webb’s measure during their January 14 meeting, presumably so they can vote it down for good at that time.

Maybe between now and then, Webb can try socializing with some homosexuals and learn what they’re up against when they have to deal with employers who share his mentality.

December 21, 2013
Four Reasons Why There's No War on Christmas
Next Post