He said the digital billboard, images of which are below, was “religious persecution of the kind that similarly lead to the Holocaust.”

Anyway, get this: In the original press release, Lanza wrote the following: 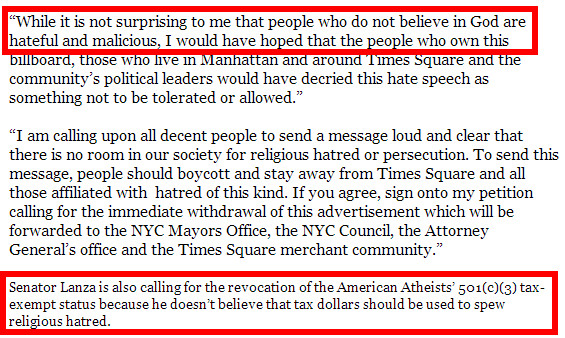 “While it is not surprising to me that people who do not believe in God are hateful and malicious, I would have hoped that the people who own this billboard, those who live in Manhattan and around Times Square and the community’s political leaders would have decried this hate speech as something not to be tolerated or allowed.”

Senator Lanza is also calling for the revocation of the American Atheists’ 501(c)(3) tax-exempt status because he doesn’t believe that tax dollars should be used to spew religious hatred.

Both of those bold-faced sections have been altered in the current version of the press release on Lanza’s site.

The first part — calling atheists “hateful and malicious” — has been changed to the following:

“While it’s not surprising to me that people who are hateful and malicious of god would endorse such an advertisement, I would have hoped that the people who own this billboard, those who live in Manhattan and around Times Square and the community’s political leaders would have decried this hate speech as something not to be tolerated or allowed.”

It’s still completely wrong — atheists don’t hate God. Atheists just don’t believe in God. (We don’t hate unicorns and leprechauns, either.) But the change suggests that Lanza knows what he said was unfair and untrue. Instead of apologizing, though, he’s just changing the press release after the fact so he can pretend it never happened.

And what about calling for the IRS to revoke American Atheists’ non-profit status?

He’s just removed it altogether in the latest version.

Maybe he realized that if AA’s tax-exemption was revoked for something as harmless as that billboard, religious-based groups like Focus on the Family and the National Organization for Marriage would be in jeopardy as well. And members of those groups are likely to make up his voting base.

Again, no apology. Just an attempt to whitewash the past.

The weirdest thing is that he didn’t even bother to change the line about the Holocaust!

Whatever. I still want an apology. He knows what he said was wrong, so why can’t he just bring himself to admit that publicly?

Just in case he changes anything else, here’s the original version of the press release, captured forever no matter what he changes on his website.

December 20, 2013
Remember the $3,000 We Raised That the Morton Grove Park District Rejected? Well, the Library Doesn't Want It, Either
Next Post