Two months ago, Abhishek Phadnis and Chris Moos, students at the London School of Economics, were manning a table for their school’s atheist group at an organizational fair when they were told they had to remove their “offensive” shirts that featured the title characters from the webcomic Jesus & Mo: 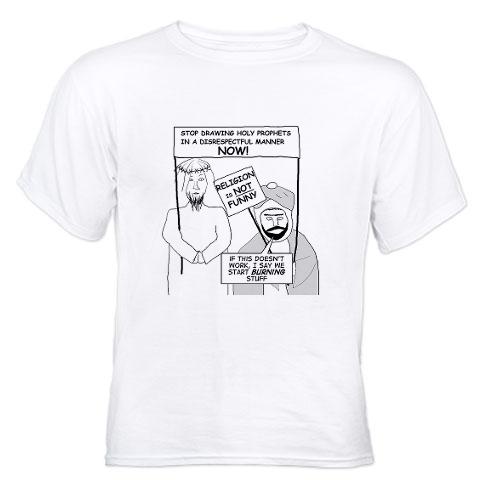 When we asked what rules or regulations we were in breach of, they told us that they did not need to give reasons for removing students, and we would be informed at a later point in time. As we refused to take off our t-shirts or leave without appropriate explanation, we were told that LSE security would be called to physically remove us from the building. We came to the Freshers’ Fair to promote our society to new students. Our ability to do that was heavily curtailed by the actions of the LSESU staff. We especially felt that the abrasive behaviour of the LSESU staff was not aimed at protecting other students from harm, but rather an attempt [to] humiliate us in front of dozens of students.

The next day, in protest, they wore the shirts again, this time with tape over the images of the characters with the phrases “This has been censored” and “Nothing to see here” written on it. That didn’t go over well, either:

Shortly after midday, the LSESU Deputy Chief Executive Jarlath O’Hara approached us, demanding we take the t-shirts off as per his instructions of the previous day. We explained to him that we had covered the “offensive” parts this time, and offered to use our tape to cover any other areas deemed “offensive”. He refused to hear us out, insisting that if we did not take off the whole t-shirt, LSE Security would be called to bodily remove us from the premises. He left, warning us that he was summoning LSE Security to eject us.

Keep in mind these were not offensive images of Jesus or Muhammad. It was criticism of religious ideas, not Muslims. Yet, the students were told to change their clothes because they were “offending” people. It was ridiculous, spurring many students to wear Jesus & Mo shirts of their own on campus in protest.

Today, the LSE issued an apology to Moos and Phadnis. And it’s about damn time:

… The Director of the School, Professor Craig Calhoun, has written to the students acknowledging that, with hindsight, the wearing of the t-shirts on this occasion did not amount to harassment or contravene the law or LSE policies.

Professor Calhoun has also acknowledged the difficulties faced by staff dealing with the matter on the day: “Members of staff acted in good faith and sought to manage the competing interests of complainant students and yourselves in a way that they considered to be in the best interests of all parties on the days in question.”

The School recognises that this apology will occasion debate and discussion. LSE and the LSE SU have already put on record concern over the nature of some of the social media debate on this matter in the past, which has been highly personalised. It is hoped that this will not be repeated. LSE takes its duty to promote free speech very seriously, and as such, will discuss and learn from the issues raised by recent events.

Rory Fenton, President of AHS commented, ‘This statement is very welcome and we hope it will serve as a deterrent to any further attempts at chilling free speech or expression by institutions. We are very concerned by the tendency to censor our affiliated societies for fear of offending religious sensitivities and see this as an important step in recognising our members’ right to free speech: the same rights that also ensure freedom of expression for religious students. Universities must recognise that their duty is to their students, not their students’ beliefs.’

Andrew Copson, Chief Executive of the BHA commented, ‘This is a triumph of reason of the sort that should prevail at our universities. Current equality law intended to provide hospitable environments for all should not be used to curtail free expression in an academic environment, even if that expression is used to may seem peculiar or even abhorrent to others. Freedom of speech and freedom of expression are fundamental aspects of an open, democratic and just society.’

Bravo, Chris and Abhishek. It’s not often that a prestigious institution learns a valuable lesson from its students.

(Thanks to Raheem for the link)

December 19, 2013
Want to Help the Satanic Temple Build a Monument Near the Oklahoma State Capitol Building?
Next Post