Dave Silverman is Wrong; You Can Be Non-Religious and Jewish December 19, 2013 Hemant Mehta

Dave Silverman is Wrong; You Can Be Non-Religious and Jewish

This is a guest post by Kate Bigam. Kate is a social media professional and freelance writer living in Washington, D.C.

When I was a child, I prayed every night. I asked God to get my crush to like me back, help me find the allowance I’d misplaced, and make my dad’s cancer disappear. My childlike view of God was a common one, that of a big guy in the sky who grants wishes to good boys and girls.

I don’t pray to God anymore because I am no longer sure that one exists.

But I don’t self-identify as an atheist, as Dave Silverman, President of American Atheists, may want me to. Instead, I identify as a Jew — a proud one, at that.

A recent Tablet article profiles Silverman’s new strategy of targeting secular Jews like me and encouraging them (us!) to stop identifying as Jewish.

Silverman wants Jews who don’t believe in God to assert their atheism and stop identifying as Jews. He believes that nonbelievers should “come out” to their families and friends and in some instances their work colleagues, identifying themselves as atheists. He argues that when religionless Americans avoid the word “atheist” to describe themselves for fear of sounding exclusionary, they are being dishonest. “Atheist is the correct word that has simply been made into a bad word by bigots,” he said, arguing that only the word “atheist” accurately conveys the proper meaning to people who are believers, “and telling the truth benefits everyone.”

While I agree that “atheist” shouldn’t be a dirty word, I have to break it to Silverman: I’m never, ever going to stop calling myself Jewish. I’ve come to use the phrase “secular Jew” or “cultural Jew,” terms I believe convey my commitment to upholding and carrying forth Judaism’s rich traditions while also implying that I’m not all-in on the religious aspects.

But I’m not afraid to tell friends or family that I don’t believe in God — and I’ve yet to experience astonishment or disdain for doing so. In fact, the recent study by the Pew Research Center on U.S. Jews found that 60 percent of American Jews believe Judaism to be primarily focused on ancestry, culture, and shared values, not religiosity. In a religious community largely populated by non-believers, the announcement that a Jew doesn’t believe in God requires no coming out party; it’s as non-shocking an announcement as they come. 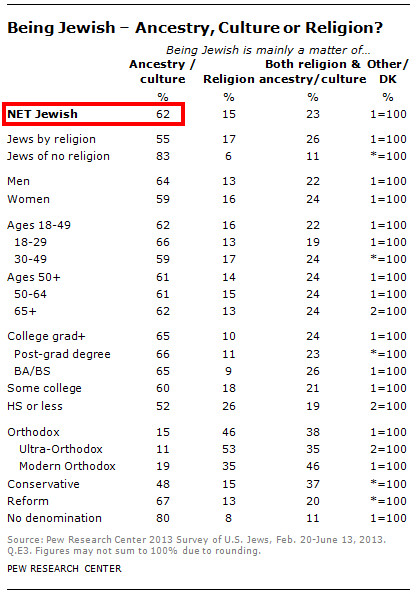 In writing his book, I, Atheist: America’s Loudest Heathen Fires Back, Silverman found himself struggling with previous assertions that cultural Judaism like mine is compatible with atheism, ultimately changing his position and disavowing his Judaism. And yet the Pew study reports than one in five Jews identifies as “having no religion” but still identifies as Jewish. How can this be?

Ultimately, whether one believes that modern-day Jews can be both secular and Jewish relies heavily on the answer to the question, “What is Judaism?” It’s an age-old question with no easy answer. Silverman has decided that Judaism is, at its core, a religion, and that the rest — culture, ethnicity, race — is tangential and irrelevant to individual identification. As the Pew study indicates, a vast majority of American Jews disagree.

So is Judaism a religion? Well, yes, of course. But is it just a religion? Overwhelmingly, most Jews will say no — there’s much more to it than that. So is Judaism a culture? Maybe, though Silverman is correct that most cultural aspects traditionally associated with Judaism — including lox and bagels, gefilte fish, and so on — are actually just Eastern European, and conflating them with Jewish tradition ignores Sephardic Jews and Jews-by-choice of other backgrounds. And speaking of Jews-by-choice (the preferred term to “converts”), Judaism can’t be a race, either, because one can’t convert to become, say, black or Asian.

So what does it mean to be Jewish? In the Jewish community, we speak frequently of k’lal Yisrael, “the people of Israel.” This is the key to today’s Judaism: that Jewishness is a people, a community, a family, and, just like in any family, no two people are exactly alike, with the same beliefs or even the same backgrounds. Families take all kinds — and k’lal Yisrael, the Jewish family, is no different. Whether Orthodox, Conservative, Reform, Reconstructionist, Humanist, secular, or something else entirely, Judaism is ultimately a peoplehood. We are bound together by a combination of shared religion, yes, but also of shared values and history and culture and experience. Though Silverman is welcome to opt out of identifying with that particular family, the fact remains that it exists — and that it has evolved to be much more than just a religion.

I hesitate on this next part, because I know it’s a common belief, if often unspoken, that today’s Jews refer too frequently to our history as victims and the oppressed. (In fact, I’ve seen it said in the comments on this very site!) Still, there’s no denying that the proliferation of anti-Semitism, both then and now, offers a compelling reason, in part, for many of today’s Jews to continue identifying as Jewish, as a matter of pride and continuity.

Allied troops liberated the last of the concentration camps sixty-eight years ago, on May 9, 1945. Many of my friends and colleagues are direct descendants of Holocaust survivors, grandparents who bore numbers tattooed on their forearms and refused to speak of the horrors they escaped. I never thought I had any personal attachment to the Holocaust until a distant cousin uncovered that the reason we knew so little about our family tree was because my maternal grandfather’s family — and all the other Jews in their tiny Lithuanian town — were murdered during the war. Were Silverman and I to claim our atheism at that time, it wouldn’t have mattered; we would’ve met the same fate as the religious in our community. While Silverman and his atheist brethren of Jewish background may not view themselves as anything more than “children of Jews,” simply being the children of Jews would’ve been enough to have them killed during WWII — and there’s no way to opt out of that reality. Silverman undoubtedly knows this history, which makes it even harder for me to understand how he can so easily part with the label.

Once, in Israel, I hopped a cab to Yad Vashem, the Holocaust museum, and learned that my driver was a first-generation Israeli who escaped the atrocities that ultimately befell his family. He was the first survivor I ever met and, given the age of that population, I may never meet another. But I’ll never forget his words to me:

So no, I don’t believe in God, and I don’t study Torah or see it as divine. I don’t pray, and I rarely attend synagogue. But I’m still Jewish. I’m Jewish because, like Dave Silverman, I am the child of Jews, and I am part of a community that says that is enough — that if I want to identify as Jewish, they will help me do so in a way that is meaningful for me, whether it be religiously, culturally, communally, or otherwise. I have chosen to align myself with elements of Judaism less focused on religiosity: I host and attend holiday gatherings with my friends; I introduce young adults to Israel for the first time by leading Birthright trips; I attend Jewish community events in Washington, D.C., where I live; I play “Jewish geography” with new friends (“Do you know so & so? How? From camp, from youth group, from your sister’s friend’s cousin’s bar mitzvah?”).

There’s more to my Judaism, of course, and spoken-word poet Andrew Lustig says it more eloquently than I ever could (above), but in the end, with or without God, the point is the same: I am Jewish. And I always will be.

December 19, 2013
Despite Jesus, the Flying Spaghetti Monster, and a Festivus Pole in Capitol, Florida Officials Say No to Satanists
Next Post