It’s safe to say that Minneapolis St. Paul Archbishop John Nienstedt (below) won’t look back on 2013 with a great deal of satisfaction. Even as an investigation into child sexual abuse appeared to taint his archdiocese, he thought it necessary to point the finger at gays and atheists (among others):

Sodomy, abortion, contraception, pornography, the redefinition of marriage, and the denial of objective truth are just some of the forces threatening the stability of our civilization. The source of these machinations is none other than the Father of Lies.

… and got roundly taken to task for it. 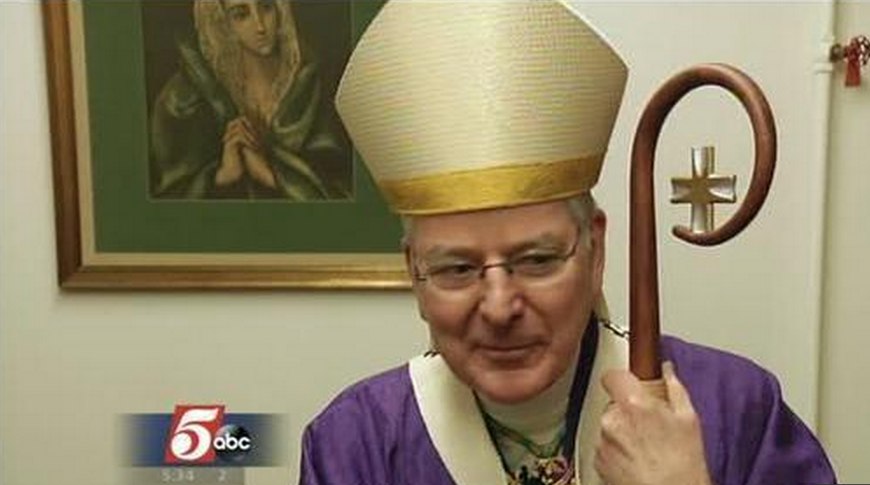 Then, an underage parishioner accused the archbishop of inappropriate sexual touching, and on Tuesday, while denying the charge, Nienstedt announced he was removing himself from “public ministry” while that investigation plays itself out. While that seems like a responsible step, it doesn’t mean a lot in practice: he’s still running the archdiocese, having decided against a leave of absence.

Then the local cops administered a PR hammer blow that must have left the padres reeling.

St. Paul Police Chief Tom Smith made public a Dec. 4 letter to Nienstedt in which the top cop complained that efforts to gain more information from church officials about earlier child abuse allegations had been met with anywhere from footdragging to stony silence. If the diocese didn’t cooperate, he added, police would have a hard time obtaining search warrants to move the investigation forward.

“We have through written and verbal requests made clear our desire to speak to individuals connected to the archdiocese and we have been told no. … If someone tells us no, they don’t want to talk to us, yet the archdiocese goes public and says ‘We’re cooperating with law enforcement,’ I guess you can come to a reasonable conclusion of why we are here today.”

December 18, 2013
Australian Mayor Denounces His Own Town's Christmas Tree as 'the Worst in the World'
Next Post