The War on Christmas is over!* We win!**

The Public Religion Research Institute says in a newly-released survey that more Americans than ever before prefer the term “Happy Holidays” to “Merry Christmas”: 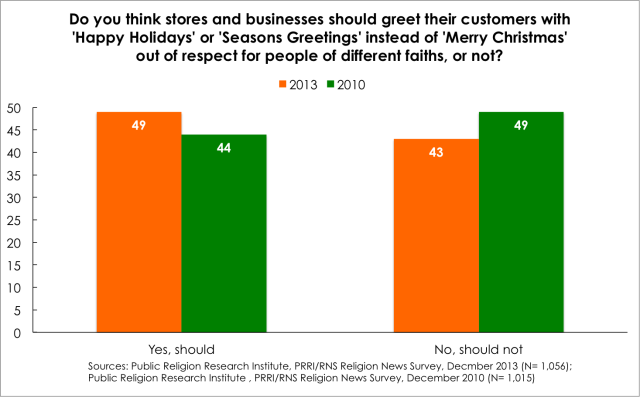 (What’s that you say? The question is biased to make people say “Happy Holidays” so they don’t seem disrespectful? Good job, my AP Stats students…)

Nearly half (49%) of Americans agree stores and businesses should greet their customers with “happy holidays” or “season’s greetings” instead of “merry Christmas” out of respect for people of different faiths. However, a substantial minority (43%) disagree. Support for saying “happy holidays” or “season’s greetings” is up slightly since December 2010, when 44% preferred that businesses use less religious greetings.

That said, the survey also revealed the ignorance of our country, with an estimated 49% of Americans saying that the whole story of Christmas — Virgin birth and all — is historically accurate.

Cathy Lynn Grossman has more on the survey here.

December 18, 2013
Last Night, the 'Keep Saturn in Saturnalia' Billboard Was Nearly Set on Fire
Next Post

December 18, 2013 If You Wrote This Anonymous Note, You're a Jerk
Browse Our Archives
What Are Your Thoughts?leave a comment