Christians wanted and got a Nativity Scene in the Florida Capitol Building… and they’re getting loads of atheism-tinged displays in return.

First, there was the Festivus Pole: 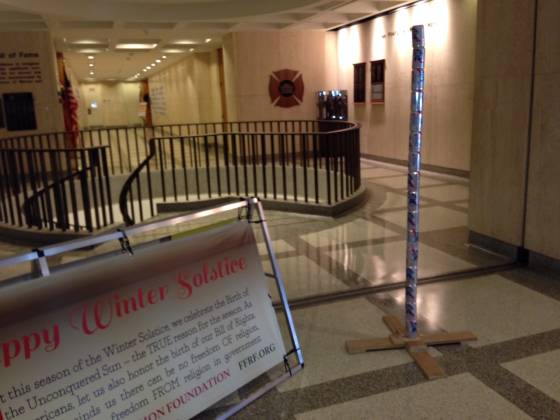 You can see from the picture above that there’s also a sign from the Freedom From Religion Foundation.

There are also two other signs from atheist groups:

And now, adding to all that, comes an homage to the Flying Spaghetti Monster:

A desk chair with a shredded cardboard representation of its deity — an eyed blob of noodles grasping two meatballs — with a sign reading: “A closed mouth catches no noodly appendages.” — ProvHerbs 3:27,” arrived Tuesday and now joins four other holiday displays in the marble rotunda.

“The point is to show that we are a part of a pluralistic society,” [Pastafarian Amanda] Richard said. “If you’re going to have inclusion of one religion in a public space, then it encourages all the others as well.”

Ben Wolf, Department of Management Services director of communications, said as long as there is real estate in the Capitol and the display meets the guidelines for public exhibition, there is nothing stopping its placement.

And that’s not the end of it. The Satanic Temple could have a display in the Capitol before long, too 🙂

Which brings up the very important question: How many non-theistic displays does it take to balance out a Nativity Scene?