“Duck Dynasty” patriarch Phil Robertson was suspended by A&E today for bigoted remarks he made in a GQ profile about gays and lesbians: 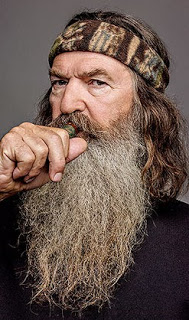 Yep, homosexuality is the same as bestiality and prostitution and adultery and intoxication and greed.

Of course, the right-wingers are screaming that the reaction from A&E (and everyone else) is some violation of free speech:

Free speech is endangered species; those "intolerants" hatin' & taking on Duck Dynasty patriarch for voicing personal opinion take on us all

Sarah Palin knows as much about free speech as she does about geography. Robertson wasn’t arrested or fined by the government for his remarks. He had every right to say what he wanted and A&E had every right to say they won’t put up with his bullshit. He can say whatever he wants but he can’t escape the consequences of his comments. It turns out his folksy nature is fine with the masses until he opens his mouth and everyone realizes he’s a dick. (As Boing Boing’s Rob Beschizza says, “This is where some Christian conservatives do that thing where the First Amendment is held to guarantee Freedom of Reality Show, isn’t it?”)

It’s arguable that Robertson and his family are among the most popular Christians in the country right now… and they just fed the stereotype that Christians lie about people they don’t (care to) understand.

It’s not the first time, either.

Back in September, Robertson said to a church audience that if atheists ran into a group of guys late at night, we would be comforted if those guys had Bibles in their hands. He also said to Pastor Rick Warren‘s Saddleback Church in July that atheists had no hope, before giving the crowd a lame defense of Pascal’s Wager.

Neither of those remarks got much media coverage, but today’s comments did. I hope that show, like Chick-fil-A, gets forever linked with anti-gay bigotry to the point where even a lot of Christians want nothing to do with it.

(By the way, it’s also not the first time right-wingers have cried “censorship” with regards to this show. In May, there were rumors that A&E told the Robertson family not to pray or talk about guns on the show. Those rumors turned out to be false.)

On a side note, the tweet of the night goes to God:

The Duck Dynasty guy who likened homosexuality to bestiality makes a living helping people trick ducks into thinking they want to fuck them.

***Update***: The post originally went up with an incorrect headline.