Catholic League, Late to the Game, Finally Gets a Billboard in Times Square December 18, 2013 Hemant Mehta

Catholic League, Late to the Game, Finally Gets a Billboard in Times Square

I know you’re all Times Square-d out by now, but Bill Donohue‘s Catholic League just got a billboard there. The message calls American Atheists (I assume) “Scrooges” and encourages viewers to “celebrate the prince of peace”: 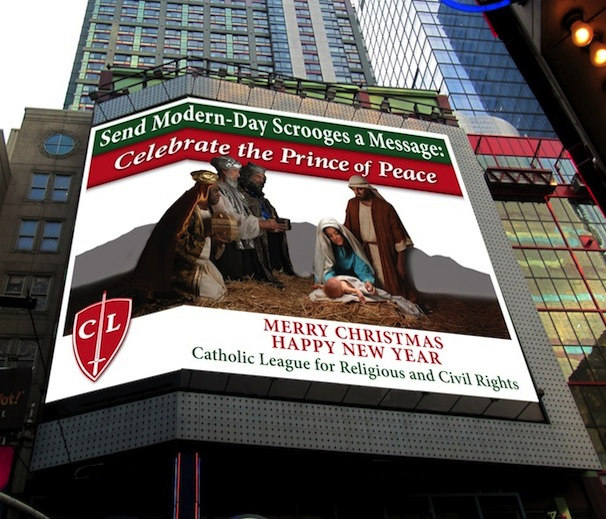 To which I say… meh.

Compare that to the atheist/Creationist billboard wars that took place weeks ago and you can see that Donohue miscalculated how much anyone would care.

By the way, we already got the “message.” We all know what some Christians celebrate. The entire point of American Atheists’ recent campaign was to say that there are alternative ways to celebrate the holidays that don’t involve Jesus.

December 18, 2013
Anglican Vicar Berates Christians Who Only Want to Hear Him Sermonize at Christmas and Easter
Next Post

December 18, 2013 Australian Mayor Denounces His Own Town's Christmas Tree as 'the Worst in the World'
Browse Our Archives
What Are Your Thoughts?leave a comment