Russian Actor and Ex-Orthodox Priest: ‘I Would Put All the Gays Alive Into an Oven’ December 17, 2013 Terry Firma

Russian Actor and Ex-Orthodox Priest: ‘I Would Put All the Gays Alive Into an Oven’

Ivan Okhlobystin, a Russian actor who took time off from the big screen to become a priest, has said publicly that gay people belong in an oven:

A popular star with fiercely conservative views, [he] told an audience in the Siberian city of Novosibirsk that all homosexuals should be burned alive. … “I would put all the gays alive into an oven,” the one-time Orthodox priest has been quoted as saying. “This is Sodom and Gomorrah! As a religious person, I cannot be indifferent about it because it is a real threat to my children!” 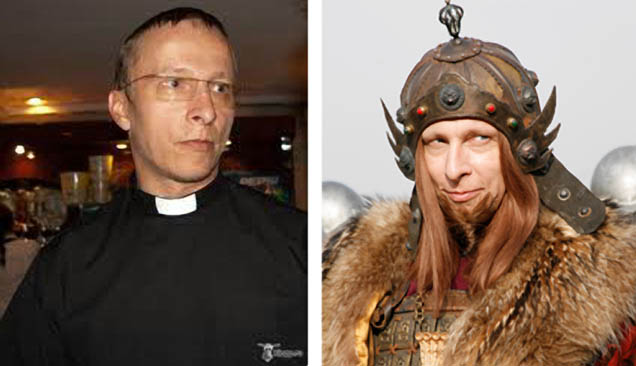 Okhlobystin later tweeted to confirm his comments. “The meaning was rendered correctly,” he said. “Everyone has the right to express their opinions.”

A religious conversion in the late 1990s caused Okhlobystin to turn his back on acting for a while, successfully pursuing the priesthood instead. But in 2010 he asked to be defrocked, announcing he would run for president and get back into the movie business. He has since lent his voice to the Russian soundtrack of Rango.

The actor’s latest voice turn is as a mean troll named Orm in the Russian animation The Snow Queen.

That must have been a stretch.

December 17, 2013
What Has Religion Done for Us This Month? Episode 13
Next Post