On Fox News yesterday, Elisabeth Hasselbeck interviewed Creationist Ken Ham about those pesky atheists and their billboards proclaiming that people can celebrate the holidays without Jesus. 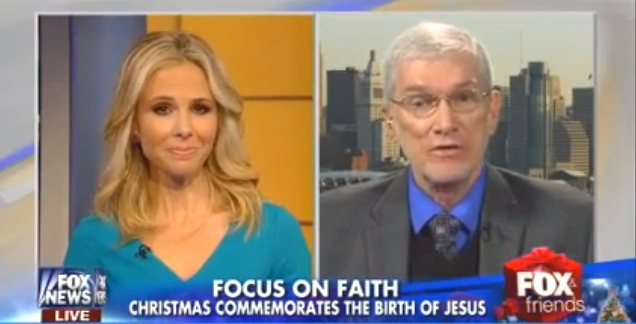 “You know, the atheist who are a very small minority in the population have been trying to impose their religion of atheism on the culture now for quite a while,” Ham explained. “You know, getting Bible, prayer out of schools. Christian symbols out of public places.”

“Because they’re becoming so aggressive, I just feel that it’s really time Christians really stood up in this culture to take on the atheists and to proclaim their message of hope,” he continued. “I mean, what’s the atheists’ message? There is no God? When you die that’s the end of you? So everything’s just meaningless and hopelessness?”

Apparently, paying for a billboard is the same as pushing an anti-God agenda throughout our entire culture.

Ham, as usual, is just lying to anyone who’ll listen. There’s no anti-God agenda on the side of atheists — not on a public policy level, anyway. When it comes to public schools and the government, all atheists want is for all belief systems to be treated equally. If a Christian display is allowed in City Hall, then atheist displays must be allowed, too. At school, kids can’t be forced to recite or listen to Christian prayers.

Ham’s upset because he knows he can’t compete on a level playing field. He needs the advantage that his majority provides. When he doesn’t get it, he lies. This is the same guy who thinks natural history museums are a problem because they dare to report the facts without referring to the Bible for supporting documentation.

Meanwhile, Hasselbeck didn’t bother to even bring up Ham’s ridiculous beliefs and let his lies just slide by without pushback. It was irresponsible journalism… which, I guess, is slightly better than we’ve come to expect from her network.