Next Year, the Creation Museum Will Indoctrinate Children for Free December 16, 2013 Hemant Mehta

Next Year, the Creation Museum Will Indoctrinate Children for Free

I’ll admit it: It’s a savvy move on their part.

The Creation Museum will allow all children 12 and under (with a paying adult) to unlearn everything they learned in science class: 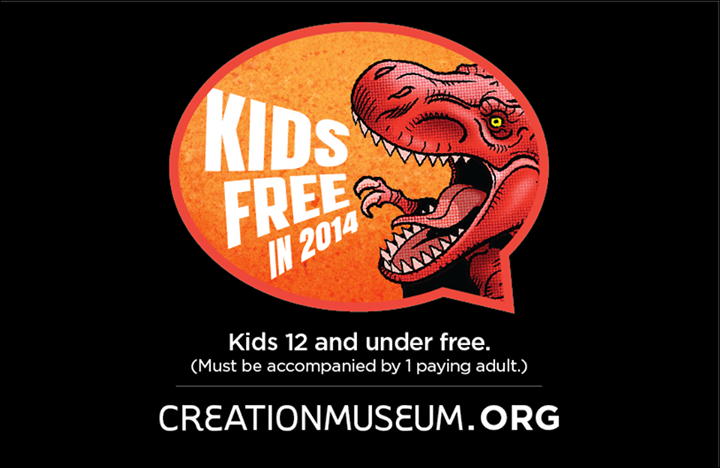 Because evolutionists are indoctrinating kids in the pagan religion of evolution — we want to do what we can to get as many kids to the Creation Museum to learn the truth concerning God’s Word in Genesis and the gospel.

I have included the logo we are using for the ‘Kids Free in 2014’ outreach. Because kids love dinosaurs, and dinosaurs are basically used as an icon for evolution, we are using a dinosaur to tell kids they can come to the Creation Museum free in 2014.

Three thoughts about that:

That said, last year, the Creation Museum made $225,000 off of kids 6-12. That’s nearly a quarter-million dollars they won’t be getting this year to update their brainwashing machine.

It’s a win-win for all sides.

December 16, 2013
This is Why It's Worthwhile to Discuss Religion with Theists
Next Post