In Pakistan, Muslims Habitually Prosecute and Kill Ahmadi Members For Reading or Quoting the Qur’an

Ever thought you could get arrested in an Islamic country for reading the Qur’an?

It recently happened to Massood Ahmad.

Masood Ahmad was arrested in Pakistan’s eastern city of Lahore last month when two men posing as patients questioned him about his faith and used mobile phones to secretly record him reading a verse from the Koran.

Why is it a crime for Mr. Ahmad to read Islam’s holy book? Simple: He’s not the right kind of Muslim.

He is … an Ahmadi, a sect that consider themselves Muslim but believe in a prophet after Mohammed. A 1984 Pakistani law declared them non-Muslims, and Ahmadis can be jailed for three years for posing as a Muslim or outraging Muslims’ feelings.

Outraging Muslims’ feelings, as we’ve seen time and again, is as easy as breathing.

Some Ahmadis get off lightly with a prison sentence: if what passes for a justice system in Pakistan doesn’t get them, “true” Muslims might.

Some mullahs promise that killing Ahmadis earns a place in heaven. Leaflets list their home addresses. 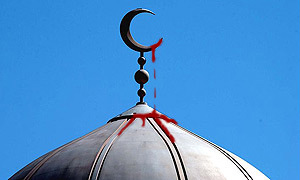 Pious Pakistani Mohammedans have grander plans than just organizing a posse here and there, though.

Mullahs have twice sought the arrest of an entire town of Ahmadis — 60,000 people — for holding religious celebrations. Residents were serving food, giving out sweets and displaying bunting, the complaints said.

“We would not have a problem with them if they did not use the name of Islam and the symbols of Islam,” said Tahir Ashrafi, head of the powerful Ulema Council of clerics.

Ah, thanks for clearing that up. Glad to hear that freedom of religion is otherwise alive and well in Pakistan.

December 16, 2013
Christians Mess with 'Keep Saturn in Saturnalia' Banner... and It's Caught on Tape!
Next Post

December 16, 2013 Selling Alcohol in London's Brick Lane? According to Local Fundies, That's a Flogging, and a Flogging Is Just the Start
Browse Our Archives
What Are Your Thoughts?leave a comment