Radio evangelist Harold Camping was so certain that the Rapture would occur on May 21, 2011 that he staked his entire reputation on it. His company, Family Radio, spent more than $5,000,000 on 5,000 billboards announcing the date and a media frenzy followed.

Late tonight, his family announced that Camping died on Sunday: 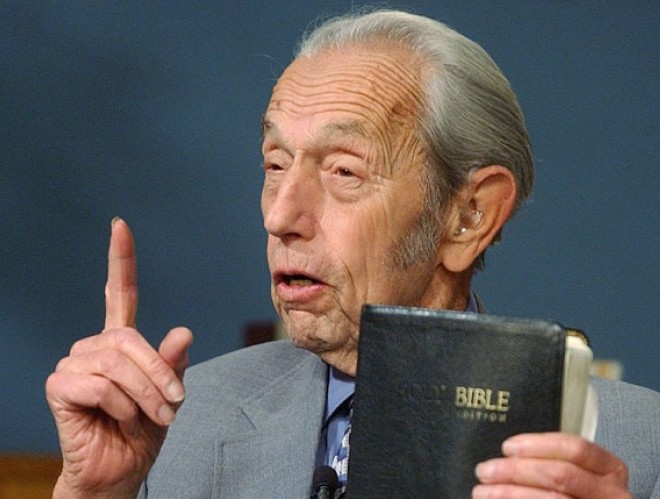 Yesterday, Sunday, December 15th, at around 5:30 p.m., Harold Camping passed on to glory and is now rejoicing with his beloved Savior!

On Saturday, November 30th, Mr. Camping sustained a fall in his home, and he was not able to recover from his injuries. He passed away peacefully in his home, with his family at his side. We know that each of us remain in God’s hand, and God is the One who knows our appointed time to leave our earthly body behind.

A Kansas news station was a little more honest about the legacy he left behind:

Camping became an international laughingstock when he warned “Judgment Day” would occur May 21, 2011 with the second coming of Jesus Christ. He went on to say the world would end October 21, 2011.

Camping admitted to reporters he was “flabbergasted” when his prediction proved false. Donations to his ministry dropped noticeably after that, and Family Radio was forced to sell several of its most powerful FM stations to stay afloat financially.

Camping was singled-out as a laughingstock, no doubt. But his beliefs were no different than those of 79% of Christians in America who think Jesus is coming back one day and the 20% of American Christians who think it’ll happen in their lifetime.

Camping’s tragic flaw was that he put a specific date on it when those other Christians were simply content with saying Jesus would return in “the future.” They’re all wrong, but Camping gave himself no wiggle room with his proclamation.

Ultimately, Camping’s investment in a fool’s errand may have done more for atheists than it ever did for Christians. Atheists had no problem capitalizing on his silly prediction either. The Freedom From Religion Foundation even purchased billboards in Camping’s hometown of Oakland, California:

If there’s anything positive I can say about Camping, it’s that he didn’t appear to be a con artist, making up a Rapture date that he knew was untrue in order to dupe people into giving money to his ministry (for reasons that would make no sense if the Rapture actually occurred on that date…). He seemed to be sincere. He really thought Jesus was coming back on that day. He was genuinely heartbroken to learn he was wrong.

But sincerity won’t be his legacy. We’ll forever remember him as the guy who was convinced Jesus was coming back on a certain day… only to learn in the most public way possible that his beliefs weren’t based in reality. Even though his family said he is now with God, you have to wonder how much doubt seeped into his mind these past two years. Did his faith crumble at all after God let him down on May 21? We’ll never know, but that nagging voice in the back of his head must have gotten at least a little bit louder the day after.

December 16, 2013
College Student (Seriously) Argues It's Tough Being a White Christian in Kansas
Next Post

December 17, 2013 What Has Religion Done for Us This Month? Episode 13
Browse Our Archives
What Are Your Thoughts?leave a comment