It doesn’t take a lot to convince me it’s hard to be gay or lesbian at Liberty University.

For that matter, it’s probably very hard to be a conservative Christian at, say, a progressive liberal arts school like Reed College.

But being an evangelical Christian at a school in Kansas? Not hard. Seriously. Not even close. 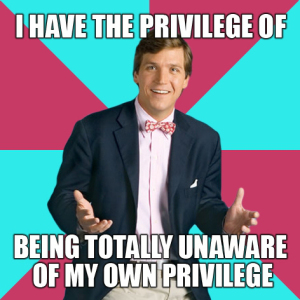 I am a minority. Not only am I left-handed and red-haired, but I am also a Christian conservative on a college campus. Do you know what that’s like? It’s like being Madonna in a monastery.

If I’m being jumped by a classroom full of liberals, I just think, “They’re just mad their health care website can’t function properly. They haven’t read the Constitution, they don’t know. If anything happens, at least I’m a part of the armed party.”

That’s what this is really about. Meyers is so used to being around people who think like the does that she’s shocked to learn there’s another world outside her bubble.

If you believe that a man once came back from the dead, or that homosexuality is somehow evil, or that someone is listening to your prayers, or that Creationism is legitimate science, you better be able to back it up. If you can’t, then don’t be surprised when students at a public university challenge you on your absurd theories. (I should mention that, at the same time, it’s a professor’s responsibility to make sure discussion in class remains civil. No student should feel uncomfortable sharing their ideas in the classroom.)

Still, it’s noteworthy that Meyers’ main example of persecution boils down to “Someone didn’t like what I said in class.” Which I’m guessing is a slightly different answer than all the black, lesbian, Muslim, and atheist students would give… if that’s the hardest part of being a white Christian, her life must be pretty damn good.

As one extremely level-headed commenter on The Collegian website wrote,

… some people are obnoxious. But after you’ve spent more than one semester on campus, you’ll realize that most people aren’t going to hold your beliefs or opinions against you. If you’re nice, people will be nice back… People don’t get upset with people for being Christian and conservative, or for being atheist and liberal. They get upset with people for being ignorant and confrontational.

By the way, I just checked and there are at least two dozen Christian student groups at KSU. (There’s one for atheists.) Even if you *feel* like a minority on campus, there’s more than enough of a support system for you.

December 16, 2013
Selling Alcohol in London's Brick Lane? According to Local Fundies, That's a Flogging, and a Flogging Is Just the Start
Next Post

December 16, 2013 Harold Camping, the Preacher Who Wrongly Predicted 'Judgment Day,' Is Dead
Browse Our Archives
What Are Your Thoughts?leave a comment