By now, you’re all probably very sick of hearing Fox News and “War on Christmas” stories… too bad. The War is on for another two weeks.

Last night, American Atheists’ Dave Silverman appeared in-studio to go head-to-head-to-head with Sean Hannity and Todd Starnes — which, according to Fox News math, is fair-and-balanced — and did a fantastic job: 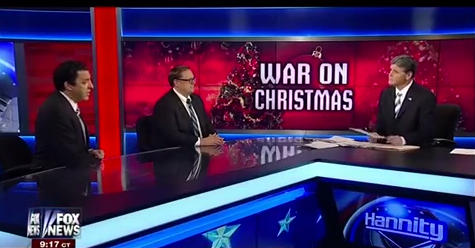 Hannity: … You know what I think? I think you’re trying to raise money by appealing to your base, by going after Christian groups.

I know I’m biased here, but the more I see Silverman on camera, the more I appreciate his voice becoming a regular part of the mix. It’s not always my message, but even on Fox News, he keeps his cool, fights back when necessary, and finds a way to get his point across. It’s a hard thing to do and he really makes it look easy.

December 14, 2013 The Devil Made Him Do It: How Jesus and Satan Absolve Christian Criminals of All Guilt
Browse Our Archives
What Are Your Thoughts?leave a comment