A Reminder of What Some Christian Leaders Said After the Tragedy at Sandy Hook December 14, 2013 Hemant Mehta

A year after the horrific shootings at Sandy Hook elementary, let’s take a trip down memory lane and recall what certain Christian leaders said about the tragedy, if for no other reason than to remind people that they should never take these despicable people seriously. 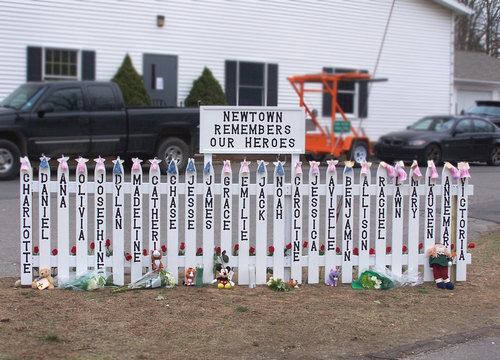 James Dobson blamed the event on society turning its back on Scripture:

And a lot of these things are happening around us, and somebody is going to get mad at me for saying what I am about to say right now, but I am going to give you my honest opinion: I think we have turned our back on the Scripture and on God Almighty and I think he has allowed judgment to fall upon us. I think that’s what’s going on.

Franklin Graham, too, blamed the event on society apparently not welcoming God:

Prospective 2016 Republican Presidential candidate Mike Huckabee blamed the event on the separation of church and state within our public schools:

“We ask why there is violence in our schools, but we have systematically removed God from our schools,” Huckabee said on Fox News, discussing the murder spree that took the lives of 20 children and 6 adults in Newtown, CT that morning. “Should we be so surprised that schools would become a place of carnage?”

Law enforcement has released few details on the alleged gunman, but Huckabee suggested that the separation of church and state may have spurred his rampage.

“[W]e’ve made it a place where we don’t want to talk about eternity, life, what responsibility means, accountability — that we’re not just going to have be accountable to the police if they catch us, but one day we stand before, you know, a holy God in judgment,” Huckabee said. “If we don’t believe that, then we don’t fear that.”

He said those suffering from a crisis from faith should look to God in the community’s response to the violence. But he added that “Maybe we ought to let [God] in on the front end and we wouldn’t have to call him to show up when it’s all said and done at the back end.“

The American Family Association’s Bryan Fischer also blamed the event on the fictional removal of God from our schools:

In 1962 we kicked prayer out of the schools. In 1963 we kicked God’s word out of ours schools. In 1980 we kicked the Ten Commandments out of our schools. We’ve kicked God out of our public school system. And I think God would say to us, ‘Hey, I’ll be glad to protect your children, but you’ve got to invite me back into your world first. I’m not going to go where I’m not wanted. I am a gentlemen.’

And I think back [to] when I was in elementary school: We had prayer in schools and we didn’t need guns.

Some experts are reporting that nothing could have prevented the Newtown school shooting. Again, I beg to differ. I think prayer could have prevented it. And I think reinstating prayer in public schools can prevent the next mass murderer from stepping foot on campus and prematurely ending more innocent lives.

Pastor John Piper blamed the event on “our own corruption”:

So what we saw yesterday in the Newtown murders was a picture of the seriousness of our own corruption. None of us escapes the charge of sinful anger and verbal venom. So we are all under the just sentence of God’s penalty.

I know that’s not even close to getting the reactions of all the pastors out there. But if it isn’t obvious, God and Satan and prayer had nothing to do with what happened at Sandy Hook. All of those statements are just Christian leaders using tragedy to further their own theologies and ministries by placing the blame on everything they always fight against, anyway, as if Sandy Hook just proves their point about X, Y, and Z.

It’s easy to dismiss those people as crackpots, but millions of people take them seriously. We need people — other Christians, especially — dismissing and denouncing them the next time they open their mouths to explain away a disaster.