On Thursday, a familiar sign returned to the town of Pitman, New Jersey:

The Freedom From Religion Foundation explains:

“Keep Saturn in Saturnalia” is the message that went up Dec. 12 on the billboard located off West Holly Avenue a mile east of Lambs Road in Pitman, about 20 miles southeast of Philadelphia.

The billboard will be up for a month and is meant to counter the “Keep Christ in Christmas” display by the Knights of Columbus that the borough seems to think is appreciated by persons of non-Christian religions and those who follow no creed at all.

This “battle” started two years ago when city officials allowed a Christian banner (put up by local firefighters) to hang over a city street: 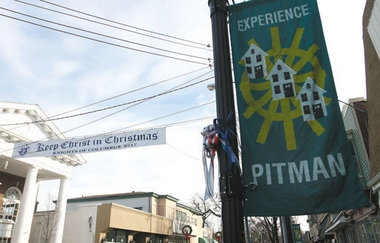 Last year, when FFRF applied for a permit to hang up the Saturnalia banner, they were rejected while the Christian banner remained.

Now, the atheist billboard hovers over everything. Which is quite an accomplish given the demographics of Pitman:

Pitman, which has about 10,000 residents, is still “dry” every day of the week. Its roots are in 1870s’ land grants for a Methodist summer camp. The 12 streets leading from the auditorium at the center of the camp were named for disciples of Jesus.

December 13, 2013
5th Grader Excluded From Speech Contest Because His Essay Mentions the Harm Caused by Religion
Next Post