***Update***: Be sure to read the happy ending right here.

5th grader Zachary Golob-Drake was supposed to deliver a speech to his fellow 4th and 5th grade classmates yesterday morning. It wasn’t just any speech. It was a speech that was chosen to be the best in his class and Thursday morning was his chance to win a spot as one of the representatives to the regional 4-H Tropicana Public Speech contest.

That glory came to a sudden halt on Wednesday when the assistant principal at USF/Patel Partnership Elementary School in Tampa, Florida pulled Zachary aside to tell him he would have to rewrite his speech or drop out of the contest.

Why? Because Zachary’s speech was all about how religious extremism has hurt humanity and how we’d all be better off following the Golden Rule (like Jesus and Muhammad wanted, he added):

But Golob-Drake says the assistant principal pulled him aside before school was dismissed and told him his speech was inappropriate.

“She started talking to me about how she thought my speech wasn’t appropriate for 4th and 5th graders and she thought that probably I would have to rewrite my speech, take the religion out or not compete.”

“She said to me probably the fairest thing to do is to take your ribbon,” he said, noting that he then got emotional.

By the end of the night, the school decided to postpone the contest until Monday. In the meantime, parents of 4th and 5th graders will receive permission slips. The form will list all of the speech titles and let parents decide whether or not they want their children to hear Golob-Drake’s speech or any of the other speeches.

That’s a complicated way to handle an otherwise simple situation. Zachary isn’t trashing religion in the speech. He’s just saying that some people use it for evil and they shouldn’t do that. Even theists could get on board with him.

“The concern was over the topic of mass murders,” Arja said. “Because these are 4th and 5th graders.”

That’s the concern? The kids who have probably played Grand Theft Auto and have seen an untold number of movies with violence in them can’t handle listening to a speech about world history because it’s too real? (Mind you, Zachary says in the speech that mass murder is wrong.) If you can’t talk honestly and openly about the motivations of conquerors, doesn’t that pretty much put a stop to all of the school’s history classes, too?

And why didn’t anyone bring this up when he won the award in his class?

You can read the speech for yourself below. See how offensive you find it:

In the Name of Religion

The world’s major religions all have messages about coexisting. But oftentimes people have found a way to bend that rule; sometimes people even use religion as an excuse to take each other’s lives. The three major religions on the earth include the Eastern religions, Islam, and Christianity. About one billion people live by the Eastern religions; about 1.4 billion are Muslim; and about 2.3 billion are Christians. Religious differences have always sparked conflict, even leading to warfare and mass murder.

One of the most famous tensions is the Crusades. Beginning in 1065, the Crusades were a series of holy wars which were fought between Christians and Muslims. It was the head of the Catholic Church, Pope Urban II who initiated the first wave of attacks. The European Christian’s intent was to force Christianity upon the Muslim people and to win back the Holy Land, known as Jerusalem. They were some of the bloodiest wars ever fought.

In 1162, about the time the Crusades ended, Genghis Khan was born and later crowned Emperor of Mongolia. Khan was a powerful ruler who conquered many lands and civilizations, which inevitably caused the Mongolian Empire to grow. Khan became so powerful that people considered him a god. Khan was known to tell his victims before causing their deaths, “I am the flail of God; for if you were without sin, he would not have sent me upon you.”

For anyone who thinks religious tensions have ended, they have not. Modern terrorism often has to do with religion. Take the story of 911, for example. On September 11, 2001, hijackers commandeered two jets and intentionally crashed them into the Twin Towers in New York, killing thousands of unsuspecting civilians. It has been confirmed that the hijackers were Islamic extremists who wanted to punish the United States for its immoral behavior.

Religion provides moral guidance for most of the seven billion people on the earth. More than 2,500 years ago, Confuscious offered guidance through the Golden Rule when he said, “Do not do to others what you do not want them to do to you.” Both Jesus and Muhammad echoed these sentiments hundreds of years later. This world would be a better place if everybody followed that rule.

That’s one 5th grader who’s wise beyond his years.

Again: Administrators didn’t claim he was wrong or inaccurate, only that they didn’t want him mentioning mass murders… even though condemning them is integral to his piece.

The controversy wasn’t about religion, Arja said, yet it was the religion part of his speech that Zachary was told to remove.

Well, here’s what I say to that: 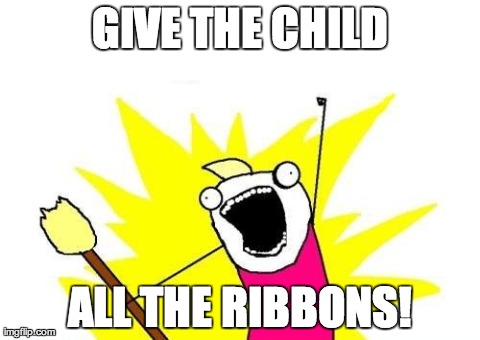 Zachary’s being punished for doling out some harsh facts. He’s not insulting the followers of Christianity or Islam; rather, he’s admitting that most believers live moral, ethical lives because of their faith. There’s nothing offensive about this speech at all.

The school’s going overboard in an attempt to assuage over-sensitive parents. Administrators need to let Zachary compete with the current version of his essay. He worked hard on it, he didn’t say anything untrue, and his argument is a very important one. Even elementary school students understand the Golden Rule. There’s no reason they should be “protected” from the truth about history.

December 13, 2013 'Keep Saturn in Saturnalia' Billboard Counters Christian Sign in New Jersey Town
Browse Our Archives
What Are Your Thoughts?leave a comment