Many Catalan Nativity Scenes Feature Jesus, the Wise Men, and Someone Defecating (Really!)

What do you think would happen if you were caught adding figurines such as these to a U.S. nativity scene?

I believe your gesture would be, um, underappreciated.

But one person’s blasphemous insult is another person’s hallowed tradition, and so it is with the caganer, or pooper — a defecating character that the Catalan people of Spain have been adding to their Christmas displays for hundreds of years.

The name “El Caganer” literally means “the crapper” or “the shitter”. Traditionally, the figurine is depicted as a peasant, wearing the traditional Catalan red cap (the “barretina”) and with his trousers down, showing a bare backside, and defecating. …

The caganer is a particular and highly popular feature of modern Catalan nativity scenes. It is believed to have entered the nativity scene by the late 17th, early 18th century, during the Baroque period. Eminent folklorist Joan Amades called it an essential piece and the most popular figure of the nativity scene. It can also be found in other parts of southwestern Europe, including Murcia, the region just south of the Valencia in Spain (where they are called cagones), Naples (cacone or pastore che caca), and Portugal (cagões). …Accompanying Mary, Joseph, Jesus, the shepherds and company, the caganer is often tucked away in a corner of the model, typically nowhere near the manger scene. A tradition in the Catalan Countries is to have children find the hidden figure.

Why would a defecating man become an appropriate, even treasured part of the Savior’s birth scene?

Best to always keep some wet wipes handy, for when the Rapture comes.

Catalan craftsmen and trinket peddlers do a brisk business in caganers this time of year, serving locals as well as foreign tourists. They insist it is an honor for famous people to be immortalized as a caganer. Presumably, then, everyone from Queen Elizabeth to the Pope is thrilled to have inspired a four-inch pants-down likeness — shown in flagrante delicto.

Here are some non-traditional caganers: 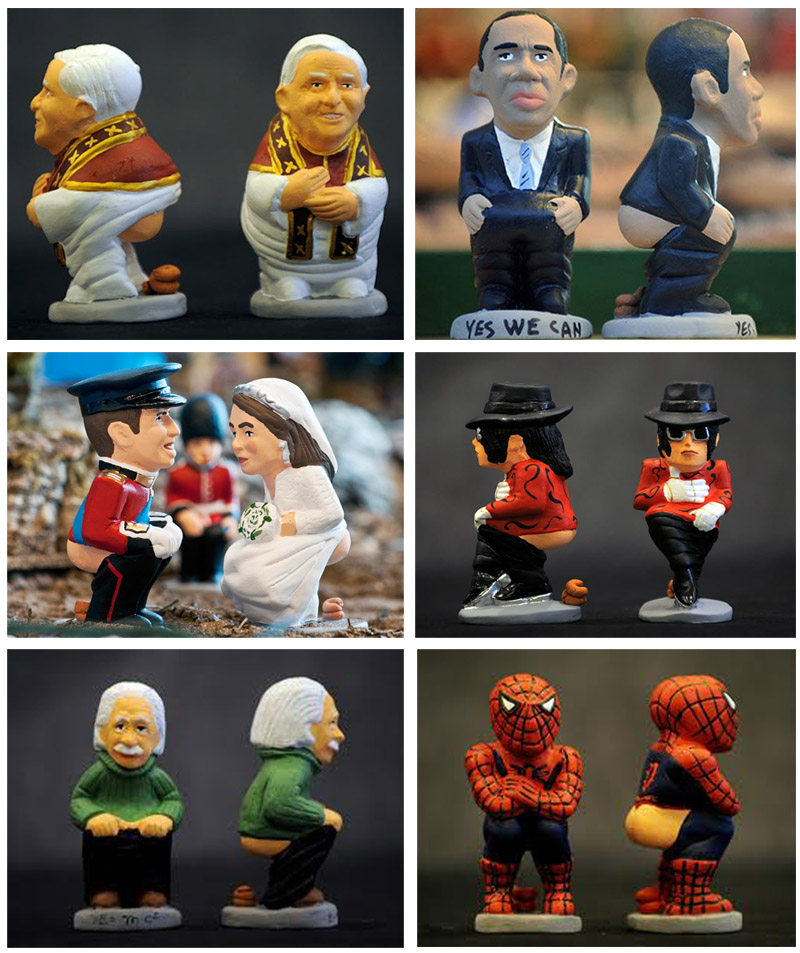 The Catalans appear to love infusing their religious holidays with scatological references. Hence, the popularity of the Tió de Nadal or caga tió, a hollow Christmas log that, on Christ’s birthday, “poops” presents such as candy, nuts, and small Christmas cakes called turróns. You can read more about these “shit logs” here.

P.S. For a giant caganer — a 19-feet-tall specimen that snagged a Guinness Record — check out the photos on this page. You know you want to.

December 12, 2013
'In God We Trust' Returns to Elementary School Sign Because It's 'Part of the Artist’s Trademark'
Next Post

December 12, 2013 Humanist Told He Can't Give Invocation at County Meeting because the 'Ministerial Association' Didn't Recommend Him
Browse Our Archives
What Are Your Thoughts?leave a comment