Pope Francis Named Time’s Person of the Year, Despite Not Changing the Direction of the Church December 11, 2013 Hemant Mehta

Pope Francis Named Time’s Person of the Year, Despite Not Changing the Direction of the Church

Time magazine announced this morning that its Person of the Year was Pope Francis: 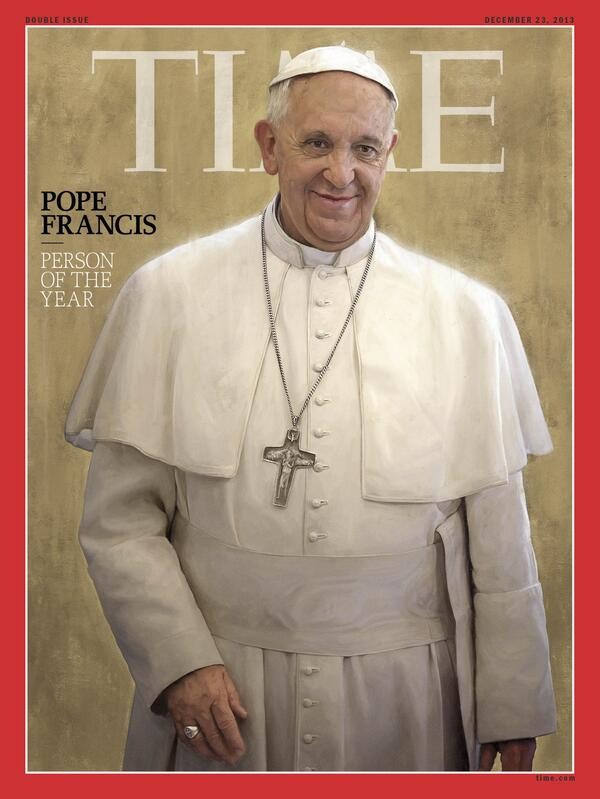 But what makes this Pope so important is the speed with which he has captured the imaginations of millions who had given up on hoping for the church at all. People weary of the endless parsing of sexual ethics, the buck-passing infighting over lines of authority when all the while (to borrow from Milton), “the hungry Sheep look up, and are not fed.” In a matter of months, Francis has elevated the healing mission of the church — the church as servant and comforter of hurting people in an often harsh world — above the doctrinal police work so important to his recent predecessors. John Paul II and Benedict XVI were professors of theology. Francis is a former janitor, nightclub bouncer, chemical technician and literature teacher.

The Church finally found a way to shine a shit. But is Pope Francis deserving of the title?

Maybe it’s because I’m an atheist, but I can see through the façade. I’m not taken in by his rhetoric because I know the Church hasn’t made any substantive changes in policy or belief. Abortion in all cases is still a sin. Homosexuality is still a damnable offense. Celibacy for priests is still mandated. Condoms are still part of the problem, not the solution. Women still cannot become priests (or Pope, for that matter). Catholic-owned businesses still don’t want to provide comprehensive health care for their employees. The Church’s sex scandals are still coming to light.

Time admitted as much:

… Francis signals great change while giving the same answers to the uncomfortable questions. On the question of female priests: “We need to work harder to develop a profound theology of the woman.” Which means: no. No to abortion, because an individual life begins at conception. No to gay marriage, because the male-female bond is established by God. “The teaching of the church … is clear,” he has said, “and I am a son of the church, but” — and here he adds his prayer for himself — “it is not necessary to talk about those issues all the time.”

That’s true; you don’t have to shine a light on those issues all the time (*cough*Bill Donohue*cough*), but you can’t ignore them either. There are too many problems within the Church and having the Pope at the helm doesn’t seem to make people want to return to the pews. (Also not helping: The fact that Catholic beliefs are just plain untrue. The wafer is still just a wafer, my friends.)

If Pope Francis can help fix some of the problems within the Church, he will be deserving of all the honors people want to throw his way. Until then, he’s just a friendly face on a vile institution.

December 11, 2013
Jennifer Michael Hecht: An Atheist President is 'The Last Taboo'
Next Post