Jennifer Michael Hecht: An Atheist President is ‘The Last Taboo’

Jennifer Michael Hecht, writing for Politico Magazine, wonders whether electing an atheist president is “the last taboo” — and she brings up Barney Frank‘s subtle summertime revelation:

… while few seemed to care about Frank’s pot-smoking admission, atheists across the country — myself included — were disappointed that he hadn’t acknowledged his lack of religious belief sooner, when it could have made a real difference. We were left wondering why a man who served 16 terms in Congress and who bravely came out as gay all the way back in 1987 felt the need to hide his atheism until he was out of office. Was it really harder to come out as an atheist politician in 2013 than as a gay one 25 years ago?

Yes, it was. Polls have repeatedly shown that atheists are the least electable minority group (at least of the ones significant enough to ask about): 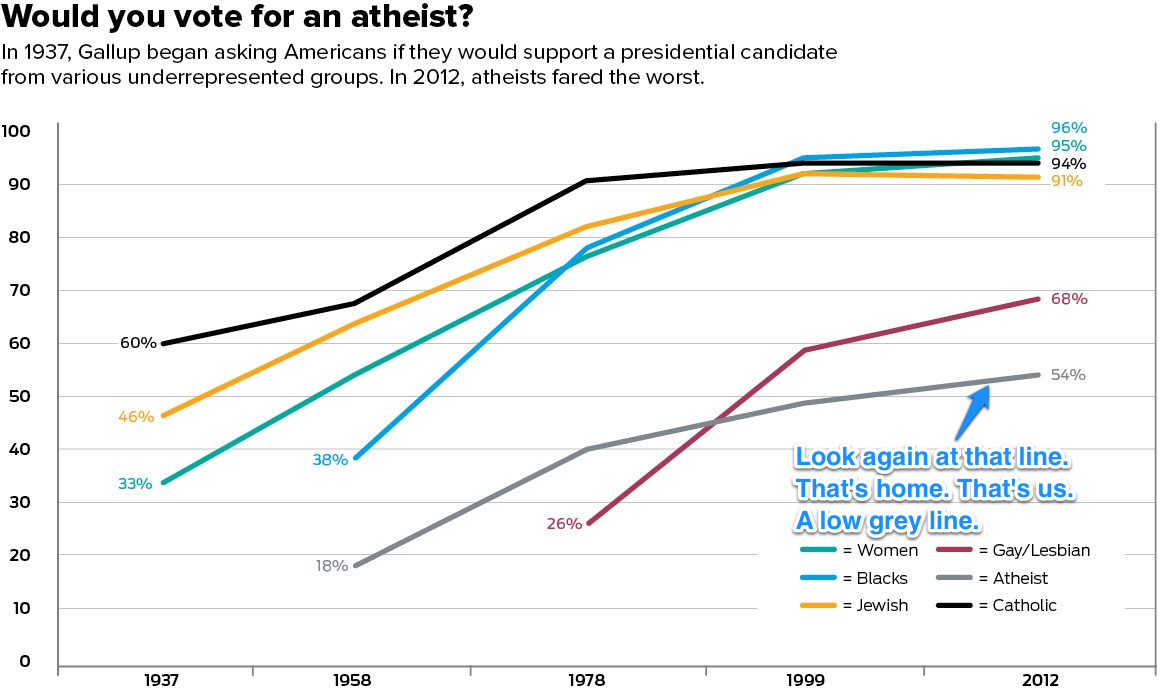 But atheists have long theorized that some of our elected officials *must* be atheists. They, like Frank, probably just want to keep it hidden… but when questioned by Hecht, Frank raised a point we talked about earlier this week: the intersection of atheism and Judaism:

Hecht: But you were so brave in coming out as gay so many years ago, so I’m wondering if you thought atheism was much more politically problematic.

Frank: You’re missing the point! Because with all the anti-Semitism in the world, I didn’t want to look like I was separating from Judaism. I’m sitting here looking on my desk at a shofar given to me by a gay congregation and a Tzedakah box. Being Jewish is a part of my identity, and I never wanted to seem like I was distancing myself from that.

Of course, we know that there are Secular Jews out there who would argue you can be both at the same time, so I don’t really buy Frank’s excuse there. He’s no more Jewish than Dave Silverman. He may enjoy the traditions, but he doesn’t believe the supernatural aspect of it.

Back to the topic at hand, though. Will we see an openly atheist president anytime soon? I share Hecht’s belief that we won’t. Not until more politicians feel comfortable coming out as non-religious. We saw how quickly the staff of newly-elected Congresswoman Kyrsten Sinema tried to distance her from the non-theistic label as soon as she won her election. At the moment, not a single member of Congress is willing to admit s/he doesn’t believe in God.

Until our politicians muster up the courage to be proudly and openly rational, there’s no reason to think an atheist will take the White House anytime soon.

For what it’s worth, Isaac Chotiner of New Republic thinks there’s reason to be optimistic:

For starters, Americans have consistently accepted things over the past 15 years that were once deemed unacceptable. In 1992, the media behaved as if the American people would greatly care whether their president had smoked pot. By 2000, it was clear that both presidential candidates had smoked pot (and Bush had quite obviously done other drugs), and no one seemed to mind. By 2008, no one (minus Mark Penn) paid much attention to the fact that an untested politician had admitted in his book to doing cocaine. That same politician managed to do the once-considered-impossible by getting elected president despite the fact that his middle name was Hussein and he had a black African father.

I think this imaginary atheist politician would have to be someone well established — someone the American people felt comfortable with. But if, say, John McCain or Hillary Clinton announced that while they respected Christianity and faith, they no longer believed in God, well, I think they could still get elected. (Winning a Republican primary would be the problem for McCain.)

If we have any hope of finding the Atheist Savior, it would have to begin there: Find someone who already has credibility for other reasons (like established politicians or well-known celebrities) and have them come out as atheists after people already like them.

Yet Barney Frank is the perfect example of someone whose liberal credentials were already established. If anyone could have come out without taking a political hit for it, it was him, and he didn’t do it.

The only atheists in Congress are the ones who are silent about it. I would love to write a post one day in the near future with the headline “Member of Congress comes out as an atheist” but I can’t even think of a politician on Capitol Hill who has the guts to tell people s/he doesn’t believe in God.

December 11, 2013 Pope Francis Named Time's Person of the Year, Despite Not Changing the Direction of the Church
Browse Our Archives
What Are Your Thoughts?leave a comment