Bryan Fischer: The First Amendment Was Meant to Protect Christians Only

“If religion means anything other than Christianity, we have no way to stop Islam or satanism,” is the title of this video. At 2:30, the American Family Association’s Bryan Fischer, discussing the First Amendment, concludes that

“By ‘religion,’ the founders were thinking of Christianity. So the purpose was to protect the free exercise of the Christian faith. It wasn’t about protecting anything else.” 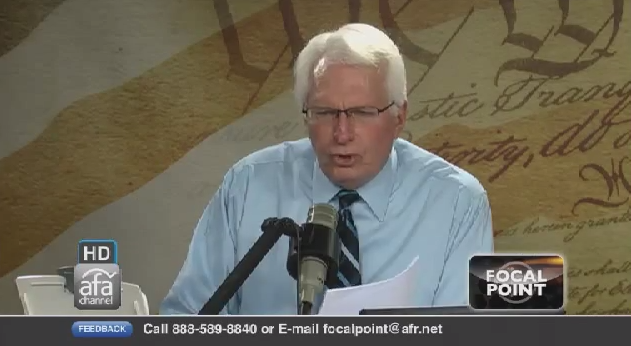 All Fischer is doing, it turns out, is scratching the latest fleabite to Christianity’s cankles: he’s trying to twist the Constitution so that he and other good Christian folk can say no to the Satanists who applied to place a monument of their own at Oklahoma’s State Capitol.

“Here is where the definition of the word religion becomes absolutely critical. If by ‘religion’ the founders meant Christianity, then you can ban a monument to Satan, because that is not Christianity. But if by ‘religion’ you mean anything, any system of belief, whether it’s Christian or not, then you have no way, you have no way to tell the Satanists, ‘You can’t have your monument.’”

Way to throw Jews under the bus — along with the other 72,000,000 Americans who aren’t Jesus-worshipers.

December 11, 2013
Just When You Think You've Seen Everything... Comes the Craziest, Most Baffling War-on-Christmas Commercial Yet
Next Post

December 11, 2013 We're Atheists, We Have Seven Kids (Four of Whom Were Adopted), and We're All Happy Freethinkers
Browse Our Archives
What Are Your Thoughts?leave a comment