This year, the holiday displays inside Florida’s Capitol building are going to be just a little more inclusive than usual:

After hearing about a group installing a manger display in the State Capitol as well as another group intending to add the Three Wise Men, Deerfield Beach resident Chaz Stevens, a self-proclaimed “militant atheist,” felt that his Festivus pole rightfully deserved a place there as well.

Stevens isn’t totally new to this. Last holiday season, he installed a Festivus pole outside a Deerfield Beach fire station.

This year, emboldened, he set his sights a bit higher. Stevens asked the Governor’s office if he could pretty please erect his ode to Festivus in the legislature’s home. The secular relic is

… an 8-foot-tall tower made of Pabst Blue Ribbon cans. He received the approval [yesterday] and will be making the trip up to Tallahassee to install the Festivus pole himself this Wednesday. 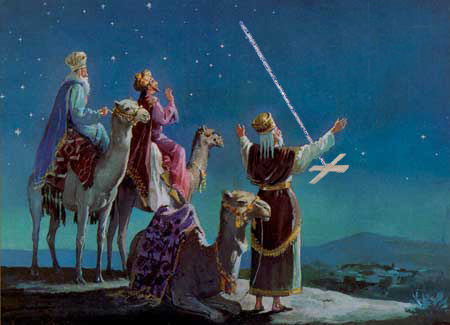 The American Civil Liberties Union warned that by allowing private groups to set up religious displays, the State was opening itself up to having to allow all sorts of individual monuments.”

Howard Simon, executive director of the ACLU of Florida, said no religious symbols, including a menorah, should be displayed in government buildings. “And I’m not sure the people who manage the State Capitol fully appreciate the door that they have opened,” he said. “They’re not going to be able to say ‘no’ to the group that they don’t favor and ‘yes’ to today’s group that they obviously do favor.”

I get Simon’s point. Rather than acceding to a tsunami of tchotchkes, it would be better if civil authorities decided that no religious paraphernalia should be installed on public property at all.

However, as long as Christians insist on their mangers and magii, other believers shouldn’t be turned away. Prepare for Jews, Pastafarians, and Satanists, among others, to add their shtuff to the mix. Whether it’s a menorah, a sacred spaghetti strainer, or a skull-and-pentagram tablet … it’s all good, if you don’t mind stumbling over the religious junk on your way to a senate vote or a committee meeting.

Another state that says “bring it on” to ostensibly festive clutter is Wisconsin, whose Capitol rotunda is home to a traditional nativity display and to a ‘Winter Solstice Display” contributed by the Freedom From Religion Foundation.

The [FFRF] scene features Charles Darwin, Albert Einstein and Mark Twain as the three wise men, the Statue of Liberty and an astronaut as angels, and an African American girl baby doll to represent that “humankind was birthed in Africa.”

These dueling scenes are joined by — what else — a Festivus pole. A sign attached to the pole announces that there will be an airing of grievances at noon on December 23 — but no feats of strength “due to liability issues.”

December 10, 2013
This Christian Education Curriculum Has the Worst Multiple Choice Questions You've Ever Seen
Next Post