Jonny Scaramanga got his hands on Packets of Accelerated Christian Education (PACEs) — curriculums used by many Christian educators in the United States and the United Kingdom.

Normally, when you see exam questions from Christian schools, the criticism is that the answers are all about the Bible (and also just plain wrong).

But Scaramanga’s images of multiple choice questions from a broad range of subjects shows that they’re not just bad questions; the answer choices all point to the obvious answer.

Imagine an entire test filled with $100 questions from “Who Wants to Be a Millionaire?” 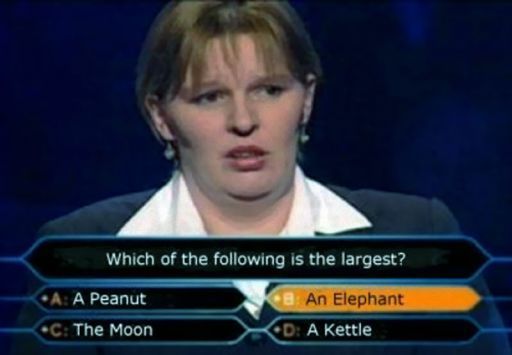 Let’s start with the questions for the 10-year-olds:

But that’s not fair. Those are questions for fourth graders. They’re supposed to be easy, right? Why not jump straight to a question for high school seniors:

There’s nothing “accelerated” about the curriculum at all. The questions don’t even get harder — they just cover different material. You can graduate from a school using the ACE program without knowing damn near anything you weren’t spoon-fed.

The worst one on the list may be this one:

The right answer is “Piano tutors.” Why? Because that was a line earlier in the text.

It’s all about regurgitation, which is exactly what the ACE curriculum wants from its future Bible-thumpers.

A good multiple choice question should at least have some credible distractors. These don’t bother with anything that might require critical thought.

Scaramanga explains the serious consequences of the ACE curriculum:

In the United Kingdom, UK NARIC has deemed qualifications based on ACE to be comparable to A-level. Ofsted routinely whitewashes ACE schools in reports, and ACE nurseries teaching creationism receive government funding.

In New Zealand, ACE qualifications are accepted for university entrance.

In the USA, ACE’s Lighthouse Christian Academy is accredited by MSA-CESS. The curriculum is used in government-funded creationist voucher programs in eleven states.

In South Africa, based on HESA’s recommendation, a number of universities have signed up to accept ACE graduates.

ACE says its curriculum is used in 192 countries and 6000 schools worldwide. This is happening nearer than you think.

Remember: this curriculum is used by schools that Louisiana Governor Bobby Jindal wanted to fund with taxpayer dollars. It’s not a joke.

December 10, 2013
7 Reasons Why People Believe in God and Don't Accept Evolution
Next Post