New Report Details the Worst Countries in the World in Which to be an Atheist December 10, 2013 Hemant Mehta

A year after it released its first report on anti-atheist discrimination around the world, the International Humanist and Ethical Union has published “Freedom of Thought 2013: A Global Report on the Rights, Legal Status, and Discrimination Against Humanists, Atheists and the Non-religious”: 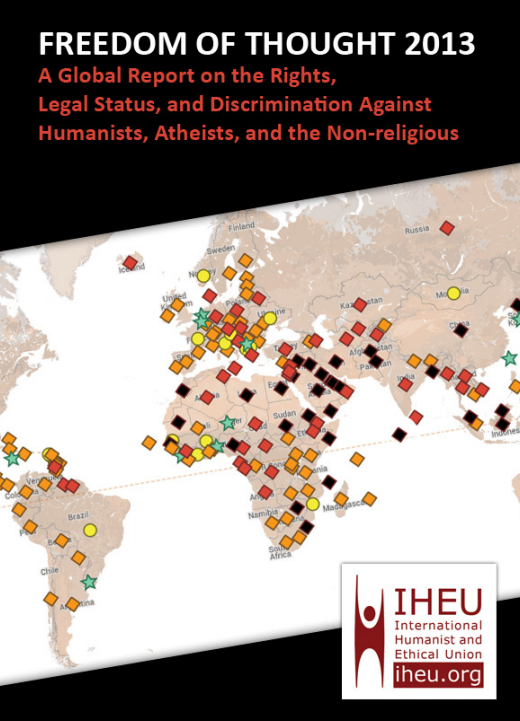 Freedom of Thought 2013 is the first report to look at the rights and treatment of the non-religious in every country in the world. Specifically, it looks at how non-religious individuals — whether they call themselves atheists, or agnostics, or humanists, or freethinkers or are otherwise just simply not religious — are treated because of their lack of religion or absence of belief in a god. We focus on discrimination by state authorities; that is systemic, legal or official forms of discrimination and restrictions on freedom of thought, belief and expression.

Our results show that the overwhelming majority of countries fail to respect the rights of atheists and freethinkers. There are laws that deny atheists’ right to exist, revoke their right to citizenship, restrict their right to marry, obstruct their access to public education, prohibit them from holding public office, prevent them from working for the state, criminalize their criticism of religion, and execute them for leaving the religion of their parents. In the worst cases, the state denies the rights of atheists to exist, or seeks total control over their beliefs and actions.

19 countries punish atheists for the crime of leaving your faith. In 12 of them, you can be executed for apostasy.

55 countries punish you for blasphemy. 39 of those can send you to prison for it, while 6 can punish you by death.

The worst countries in the world for those who support religious freedom (and civil rights in general)? There are a lot of candidates from Africa and the Middle East:

The report’s release coincides with the United Nations’ celebration of Human Rights Day.

Robert Evans of Reuters has more on the report here.

December 9, 2013
Edward Tarte Responds to a Critic Who Believes You Must Be a 'New Testament Christian' to be Good
Next Post