The veneration of the folk saint Santa Muerte, while nominally a Catholic phenomenon, is causing more and more problems for the Catholic Church in Mexico. Santa Muerta is believed to have some eight million followers in Mexico alone, from average poor folks to drug-trafficking criminals to, oddly enough, LGBT people. 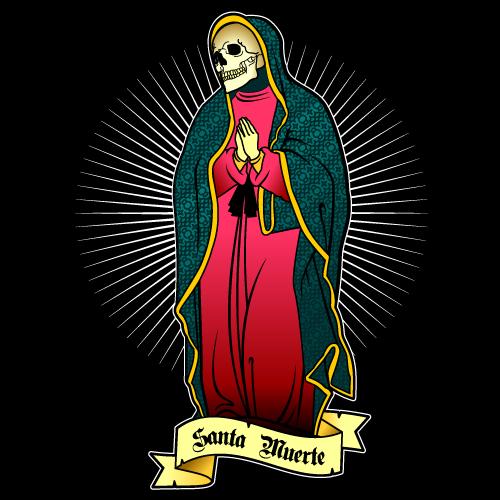 “[She] has also been adopted by the drug traffickers who ask her for help to avoid arrest and to make money,” [Francisco] Bautista [an exorcist] says. “In exchange they offer human sacrifices. And this has increased the violence in Mexico.” …

Mexico’s exorcists say there is unprecedented demand for their services. Some are even not taking new cases, as they are having to exorcise demons almost every day.

The way Bautista sees it, the cult around Santa Muerte is only one of two reasons why [cough] demonic possessions are spreading in Mexico.

Can you guess the other one? It’s a doozy.

[T]he decriminalisation of abortions in Mexico City, in 2007. Both the cult and abortion have given evil spirits a foothold in the country, [Bautista] insists.

“Both things are closely related. There is an infestation of demons in Mexico because we have opened our doors to Death.”

That’s not how Enriqueta Romero, a Santa Muerte shrinekeeper in Tepito, sees it.

Romero says the church itself bears responsibility for the rise of the cult, having shot itself in the foot with the worldwide child abuse scandal.

“They finished off our faith with the things that the priests did. What can they criticise? That we believe in Death? That is not bad. What’s bad is what they did,” says Romero.

As in any battle over whose superstition is better, I’d be hard-pressed to designate a true winner.

December 10, 2013 New Zealand Census Results Show That At Least 39% of the Country Profess 'No Religion'
Browse Our Archives
What Are Your Thoughts?leave a comment