A Black Eye For Feminism and Atheism: Watch This Nasty Mob Attack Catholics With Paint and Gobs of Spit December 10, 2013 Terry Firma

A Black Eye For Feminism and Atheism: Watch This Nasty Mob Attack Catholics With Paint and Gobs of Spit

My mind is still reeling after I just watched the footage of a recent feminist protest outside a cathedral in San Juan, Argentina. In the NSFW video, shot on November 24, the pro-choice demonstrators are seen attacking a cordon of non-violent Catholic volunteers who said they were trying to protect the building from vandalism (apparently, the attendees of the annual women’s rights conference that spawned the demonstration had been on graffiti rampages before).

How can people do this and still look at themselves in the mirror the next morning?

The protesters, many of whom were topless, sprayed paint on the men, wrote on their faces with markers, and spat on them, in addition to other indignities. The men stood with linked arms and prayed during the assault. Inside the church the Archbishop Alfonso Delgado also led 700 people in prayer.

If I were merely reading about this, I admit I’d be inclined to bring some skepticism to these allegations. Did exaggerations or miscommunications color the reporting?

But the video — as far as I can tell — doesn’t lie. Even if some creative editing occurred, it’s a stunning record of nastiness and malignancy. And it seems to go only one way.

Again, the footage is not safe for work. 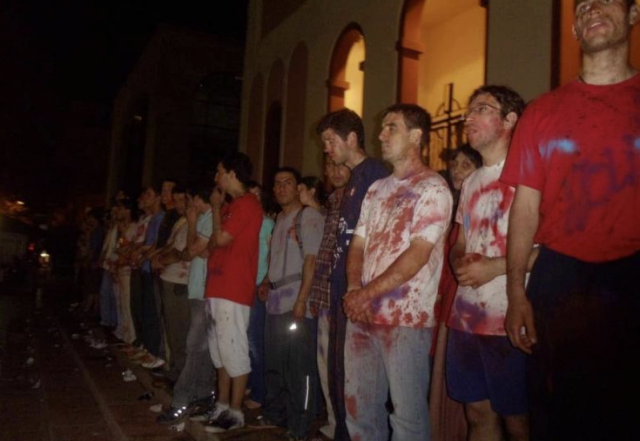 Like lots of people, I can appreciate a passionate, vigorous protest. A woman’s right to choose is worth fighting for. But not — never — like this. Spitting on your opponents? Waving your middle finger in their personal space and screeching at them like unleashed banshees? Shoving them, and draping your worn underwear over their necks and faces? Using black marker to draw upside-down crosses on their foreheads? Spray-painting their shirts, faces, and genital areas? Four of those five things qualify as battery, perhaps even assault.

And apart from the criminality of it, such acts are by definition a debasement of your arguments and intellect; a self-inflicted blow against your cause; and a classless, losing PR strategy if I ever saw one.

If any atheists or feminists are disinclined to find all this a big deal (I hope they’re few and far between), I invite them to reflect on how they’d feel if the roles were reversed. What if a mob of shrieking Catholics spray-painted feminists’ genitals and clothing, spat in peaceful atheists’ faces, et cetera?

Collectively, atheists hate it when Christians in the Western hemisphere depict themselves as martyrs whose love of Jesus brings out “hate” in others. In a country where Christians make up the majority of citizens, to hear of how victimized they are is tiresome and off-base. But in this case, the complainers are right for once.

I admire the men in the cordon for keeping their cool in the face of such extreme hostility, and I hope that the video will help in tracking down the culprits — and in letting the victims see their tormentors held accountable in court.

December 10, 2013 Oklahoma Legislator Who Supports Ten Commandments Monument Slams Satanic Temple's Proposal for Being Too 'Religious'
Browse Our Archives
What Are Your Thoughts?leave a comment