Now that marriage equality has been signed into law in Illinois, the anti-gay-rights Illinois Family Institute is bored. Instead of redirecting their energy to a more worthy cause — like a political science class or maybe yoga — the nonprofit Christian ministry created a sloppy image attempting to satirize the state’s recent marriage victory.

Perhaps more than any other material they’ve ever produced, this graphic proves that IFI have no idea what they’re talking about. If this is the logic that guided their work, it’s no wonder they lost.

The fake label reads “Same-Sex Marriage: Emergency Energy for a Desperate Politician” and the product it’s selling is as like to convince you to oppose gay marriage as it is nutritious. 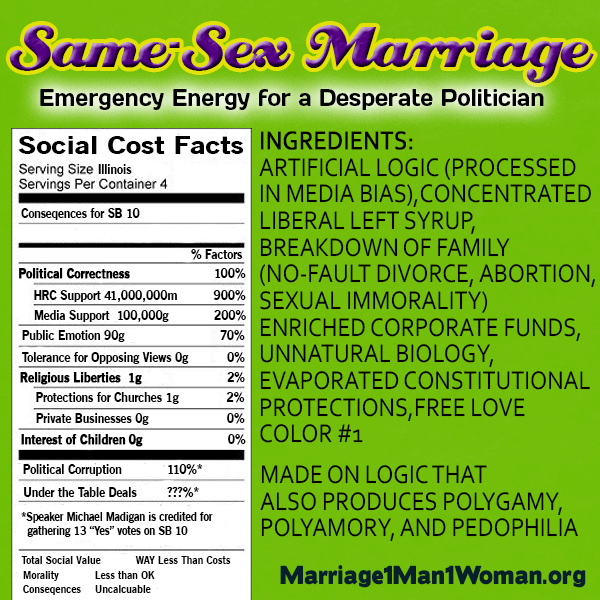 Here are their “ingredients” for same-sex marriage:

Perhaps a breakdown of why our logic is so artificial? Or an explanation of how same-sex marriage will lead to abortion and no-fault divorce? How about some numbers illustrating enriched corporate funds? And for the love of Pat Quinn, WHERE can I get some lipstick in free love color #1?! (Which I’m sure the IFI will tell you is “Glitter.”)

Next, in the column where you’d read “Nutrition Facts” on your average Twinkie, the IFI lists “Social Cost Facts” for same-sex marriage (serving size: Illinois). A couple of these are simple regurgitations of your average mindless Christian rhetoric: Political Correctness 100%, Public Emotion 70%, Media Support 200%. That sort of thing.

Others, though, are more infuriating. A selection:

(Hemant’s note: They would *totally* look you in the eye and tell you that. That’s how awful these people are.)

I love the summary, too:

Reading this is exhausting! The kicker to the whole thing is at the bottom right: “Made on logic that also produces polygamy, polyamory, and pedophilia.” Actually, IFI, I’m pretty sure the Bible is all about pedophilia and polygamy, and polyamory is a perfectly legitimate practice that doesn’t deserve to be lumped in with the others. Not that you’ll ever take the time to learn that.

For the most part, there’s no use getting worked up over this. Marriage equality is legal in Illinois and the IFI can’t do anything about it; wahoo! Regardless, I extend a heartfelt thanks to the Illinois Family Institute for the laugh and for demonstrating how mindless the arguments against marriage equality truly are. If these are supposed to represent the best arguments the opposition can offer, the dominoes will fall in the other states in no time.

December 8, 2013 Catholic School Fires Veteran Teacher After He Decides to Get Married
Browse Our Archives
What Are Your Thoughts?leave a comment