Were he a faceless Internet commenter rather than a five-term member of the House for Texas’ first congressional district, the technical term for Louie Gohmert would be “troll.” 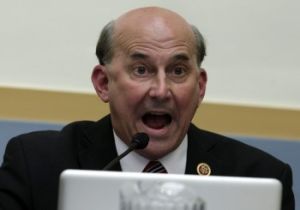 Here’s the man’s latest emission: If atheists wish to continue to be free to profess their unbelief in God, they must help Jesus flourish by encouraging Christians to worship. That’s because only Judeo-Christian values can guarantee atheists’ freedom to be godless Americans.

That, in a nutshell, is what Gohmert said on the floor of the House of Representatives on Thursday. Here’s the video, courtesy of C-SPAN and Mediaite:

“No country has ever fallen while it was truly honoring the god of Abraham, Isaac and Jacob. So if you were completely areligious, completely atheistic, but you wanted to have a free country, and you wanted to have it safe and protected, then it would sound like — from historical purposes — that it might be a good thing to encourage those who believe in God to keep doing so. Because when a nation’s leaders honor that God, that nation is protected. It’s only when it turns away that it falls.”

Gohmert previously received some lovin’ on Friendly Atheist when he introduced the CHURCH Act, a bill that exemplified the literal opposite of church-state separation by proposing a plaque to honor the religious services that were once held inside the Capitol. Prior to that, we noted that he openly blamed the deadly mass shooting in the Aurora movie theater on the godless state of American high schools.

The representative is also known for his fervent belief in terror babies; his insistence that the U.S. government use the Bible as a policy guide for decisions involving the Middle East; and his indignant request that the Attorney-General refrain from casting aspersions on his asparagus.

December 8, 2013
Catholic School Fires Veteran Teacher After He Decides to Get Married
Next Post

December 8, 2013 The Homeschooled Christians Who Escaped
Browse Our Archives
What Are Your Thoughts?leave a comment