Every time Dave Silverman appears on Fox News Channel, an atheist gets out her wallet. 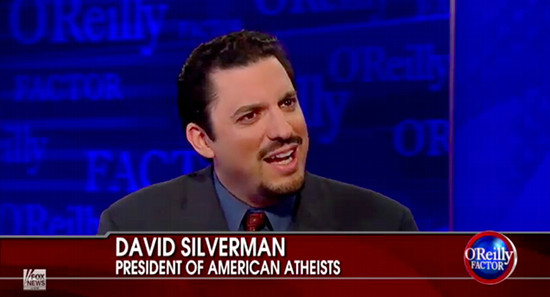 Washington Post media critic Erik Wemple tracks how atheists’ appearances on Fox News — which escalate around this time of year for reasons no one can explain… — coincide with increased donations and membership to their groups:

“I will say that we get scores of donations on the day or two following an appearance on Bill O’Reilly or ‘Hannity,’” says Silverman, who says he has turned in about 25 Fox News appearances over the years. And since the segments tend to get passed around throughout the year, says Silverman, “they’re the gift that keeps on giving.” Following an O’Reilly appearance, says Silverman, his association receives “hundreds of e-mails,” most of them negative but some “very positive.”… “I don’t think Bill O’Reilly understands how many atheists are watching,” says Silverman. As for all those liberal atheists out there, Silverman says that watching O’Reilly’s show can serve to get them “energized.”

I should point out the obvious: This isn’t a trend unique to atheists. Anytime a group’s representative appears on TV, the exposure helps get their message out to a new group of people. The publicity will sell books if you’re an author and bring in donations if you work for a non-profit.

What makes atheists unique in this regard is that they’re raising money thanks to invitations from the people (or should I say characters) who are on the polar opposite side of the culture wars.

Though, as Annie Laurie Gaylor of the Freedom From Religion Foundation pointed out, they take an ethical approach to all of this right-wing publicity:

… Gaylor refuses to fundraise off of O’Reilly’s hatchetings: “We’re not as good at the religious right at fundraising on phony issues…,” she says. “No, we did not send out a fundraiser asking for money because Bill O’Reilly doesn’t like us.”

They don’t need to send out a fundraiser. The FFRF mentions on his show are enough to get some liberals to give a gift.

Hell, Bill O’Reilly may be the most influential atheist fundraiser out there.