It’s hard to see how Bill Nye‘s open letter to President Obama will succeed, but dammit, I wish it would: 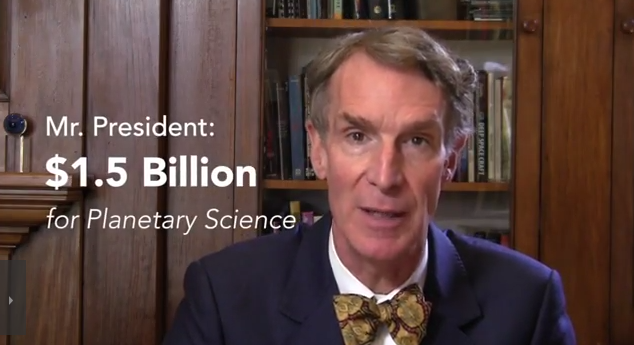 Planetary exploration not only brings us astonishing discoveries from other worlds, it inherently leads to innovation, because we invest in solving problems which have never been solved before. That in turn creates new businesses and economic growth. But more importantly, supporting a robust space program raises everyone’s expectation of what’s possible. With a space program, everyone in our society comes to believe and expect that any problem we face can be solved. It’s inherently optimistic. It’s part of our national character.

As Neil deGrasse Tyson said so eloquently in the video below, it isn’t that we don’t have the money to fund NASA properly, it’s that our elected officials have chosen not to fund it properly:

December 7, 2013 Fox News is Indirectly Contributing to These Atheist Groups' Bottom Line
Browse Our Archives
What Are Your Thoughts?leave a comment