West Virginia City Council Approves ‘In God We Trust’ Display Because the ‘Country’s Going to Hell in a Handbasket’ December 6, 2013 Hemant Mehta

The Clarksburg City Council in West Virginia unanimously approved a motion this week to display “In God We Trust” in City Hall. We’ve gotten used to these resolutions by now. There’s always talk about how it’s our nation’s motto and how it’s patriotic… but the council members here didn’t even bother to hold back their contempt for church/state separation and anyone who would advocate for it: 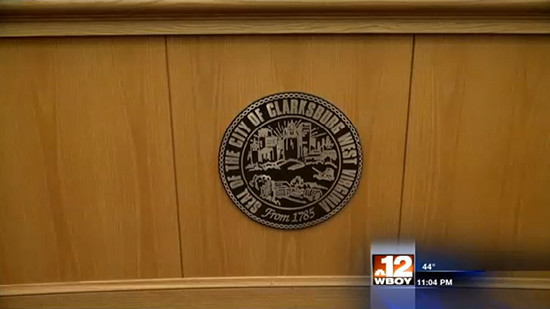 Councilman Jim Malfregeot said council decided to take the action after learning about a nationwide initiative to put those words in all city halls.

Malfregeot said he thinks other cities will get on board as well.

“They’re taking God out of everything. The country’s going to Hell in a handbasket, so I thought, ‘wow. What a great thing to do.’ And to be the first city hall and city chambers in the state of West Virginia to have In God We Trust,” said Malfregeot.

Say what now? Who‘s taking God out of everything? Certainly not atheists or First Amendment groups that simply want God to remain separate from government. Want to pray in your home? Your church? Your office before a city council meeting? Have at it. Go wild.

But Malfregeot didn’t just stop there; the next thing out of his mouth was “The country’s going to Hell in a handbasket,” as if it’s the people who support the Constitution who are ruining this country. As if keeping God out of government functions is what’s ruining this country, and not the shitty policy-making of people who use God as a tool to get elected to office.

Malfregeot wasn’t alone in his thinking:

Councilwoman Margaret Bailey said she is very grateful that Malfregeot brought the idea to council.

Christians, Muslims, Hindus, Jews, Shintos… sounds like she covered everybody!… except for all those people who don’t believe in God. Who needs them anyway, am I right?! (15% of people in the state are Nones.) I’m sure Muslims in the city are just thrilled by the decision.

Even when the proposal was being floated around, Vice Mayor Gary Bowden got in on the ignorance train:

Bowden said displaying “In God We Trust” doesn’t favor one religion over another or denigrate other faiths.

“It says we look toward God or a supreme being for guidance,” Bowden said. “I see no reason why we can’t proudly display that message in conjunction with the manner in which we try to conduct business in the city.”

You get the feeling Bowden never considered how he’d feel if the city displayed a motto reading, “In God We Don’t Trust.” And how invisible he’d feel if someone in a position of power defended the decision by saying, “What’s wrong with that? It doesn’t favor one god over another. We don’t believe in any gods!”

All of these elected officials have Jesus on the brain and don’t give a damn about the residents who aren’t religious. They’re in the majority, so they’re going to push their faith onto everyone. If you live in the area, contact the members of the city council and let them know you feel.

(Thanks to Lee for the link!)

December 6, 2013
The Late Ariel Castro, Kidnapper and Rapist, Is 'Saved'; Shows His Devotion to God One Last Time
Next Post