Seven Years Later, Ted Haggard and His Old Church Are Fine, but What About the Man Who Exposed Haggard’s Hypocrisy? December 6, 2013 Hemant Mehta

Seven Years Later, Ted Haggard and His Old Church Are Fine, but What About the Man Who Exposed Haggard’s Hypocrisy?

In a cover story for December’s Christianity Today, Patton Dodd explores how New Life Church in Colorado Springs is doing several years after founding pastor Ted Haggard had a dramatic fall from power: 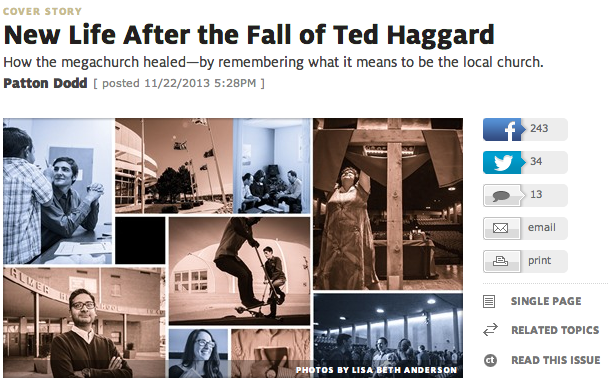 Over the first weekend of November 2006, New Life’s meteoric rise came to a crashing halt. Haggard resigned from his church and the [National Association of Evangelicals] in the wake of accusations of drug use and a sexual relationship with a man in Denver.

New Life was left with $26 million in debt, dwindling resources, and uncertainty at every turn. More accusers came forward. In the coming months, reports of Haggard’s recovery and restoration popped up, usually putting both church and former pastor in a bad light…

The Haggard revelations were like catnip for so many of us since he was arguably the most influential evangelical leader of the time and a key voice for the anti-gay-rights movement.

Dodd writes that, while the church is bouncing back, it’s still trying to reclaim its identity:

The various expressions of Christian discipleship at New Life — liturgy, reexamining theological commitments, refining and humbling the pastoral office, attending to the needs of Colorado Springs’s most vulnerable, and charismatic prayer and worship — are possible in some ways only because New Life remains a megachurch. It remains a big tent, but now it’s one without a unified brand or personality.

What about Haggard? He began a new church in Colorado a few years ago and it’s chugging along. He wasn’t happy with this article, though, as he wrote on his Facebook page: 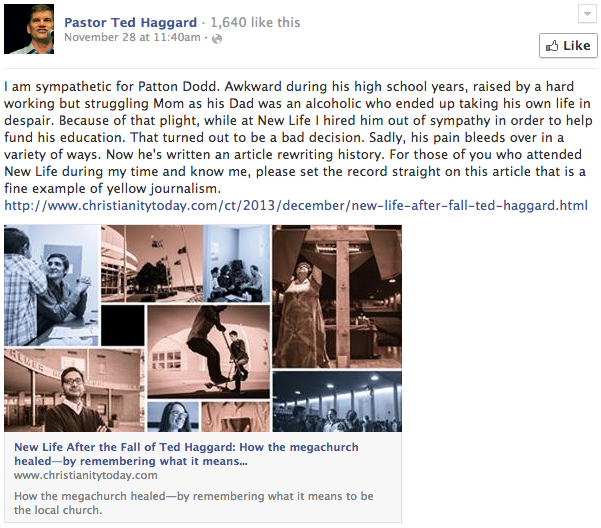 I am sympathetic for Patton Dodd. Awkward during his high school years, raised by a hard working but struggling Mom as his Dad was an alcoholic who ended up taking his own life in despair. Because of that plight, while at New Life I hired him out of sympathy in order to help fund his education. That turned out to be a bad decision. Sadly, his pain bleeds over in a variety of ways. Now he’s written an article rewriting history. For those of you who attended New Life during my time and know me, please set the record straight on this article that is a fine example of yellow journalism.

Haggard doesn’t specify what history has been rewritten…

Meanwhile, the one person whose voice was ignored in all of this discussion was that of Mike Jones, the former escort who “outed” Haggard after realizing that his client was the same man who frequently went on television to denounce homosexuality.

While Jones did several interviews after the scandal broke, even writing a book about it, he feels that the gay community turned its collective back on him when he needed them the most. You can understand why: Even though Jones exposed the tabloid-worthy hypocrisy of one of the most famous evangelical Christians in the country, he was still an escort and a drug-user. If you were going to draw up your ideal spokesperson for gay rights, that stuff probably wouldn’t be in the description. As a result, he has little to show for his actions.

I first met Jones about six years ago when he did an interview for this site. Since then, we’ve emailed each other periodically. Yesterday, I asked Jones how he was doing years after the scandal. Was he doing as well as New Life Church? Has he bounced back like Ted Haggard?

This is what he told me (quoted with permission):

The positive part of my life is the line of work I am in. I care for Alzheimer’s and elderly individuals. It is not a glamorous job and [is] sometimes very trying, but I feel I am making a difference in people’s lives who may otherwise have no one around who cares. My father is still living who I love very much and I am still close to my younger brother. All other family members never did get over my public life and want no contact with me. Makes me sad but I have come to terms with that.

I always considered myself a gay rights activist. But as time has passed I no longer fall into that category. In fact I could care less about the gay community. I learned no one owns the word hypocrisy and intolerance. Many may look at the following as bitter and maybe I am. When I look back at my story, I have a box full of newspaper articles which indicated that this scandal had changed the political landscape. Even Karl Rove stated that the Haggard scandal helped the Democrats win. Now perhaps I am wrong, but what other gay person has made such a national political impact? Colorado went from a red state to blue.

Recently, Colorado passed Civil Unions. We also have a new Speaker of the House, Mark [Ferrandino], who happens to be gay. I contacted the Speaker by voice mail and email asking to be part of the celebration when the vote happened because of what I had been through and my sacrifice to get to this point in history. I neither received a call back or a response from my email. The gay community has snubbed me big time and tossed me to the side. So I could care less about gay rights! Perhaps I had made a big mistake.

So this is where I am at in life.

But I do offer thanks and gratitude to the individuals who did offer me support.

Despite the frustration he still feels toward the gay community, there’s no argument that he made a courageous and tremendously important decision in exposing Haggard. He didn’t have to, and if he remained silent, who knows how much more powerful Haggard (and the evangelical movement) would have gotten. We owe Jones a huge debt of gratitude for coming clean about what was happening even though it meant putting himself in the line of fire and revealing his own secrets.

December 6, 2013
Time Magazine Says 'There Are No Atheists at the Grand Canyon,' Claims that 'Awe Equals Religion'
Next Post