Faisal Saeed Al-Mutar, who will be speaking at the opening of the Humanist Hub near Harvard’s campus this weekend, is an Iraqi refugee whose Secular Humanism is very much at odds with his cultural background. 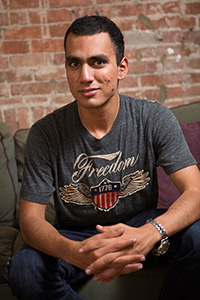 Earlier this year, Al-Mutar fled Iraq. He received asylum in the U.S., partly due to his conflict with Islamists over his secular humanist identity and partly because his brother, cousin and best friend were killed in sectarian violence there.

After landing at LAX, Al-Mutar spent some months in Houston before moving to Washington, D.C., where he now lives and runs the Global Secular Humanist Movement, a group that aims to use reason, evidence and scientific methods of inquiry — rather than faith and mysticism — in seeking solutions to human problems. On Facebook, the movement has 221,000 fans, and as Al-Mutar speaks at national events, that number continues to grow.

Living in Iraq and founding GSHM, Al-Mutar received death threats from al-Qaida elements and the Mahdi Army, two influential and powerful religious militias operating in Iraq. While it is not a crime to be an atheist in Iraq, religious militias take matters into their own hands.

If you haven’t already seen it, the GSHM Facebook page is an excellent resource for religion news from around the world.

December 6, 2013
An Atheist Group's URL Redirects to a Popular Church's Website, so What Do They Have to Say About It?
Next Post