The Popular Story of the Kansas City Prayer Booths Is False, But the Brilliant Artist Behind the Booth is Genuine December 5, 2013 Terry Firma

The Popular Story of the Kansas City Prayer Booths Is False, But the Brilliant Artist Behind the Booth is Genuine

Feast your eyes on this addition to the (sub)urban landscape:

According to Topekasnews.com, “prayer booths” like these have been placed all over Kansas City, Kansas in recent months.

Since the booths were put in throughout town several months ago, Kansas City data tracking confirms that on average, the prayer booths receive over 100,000 callers per week.

“It is therapeutic, that is how we lobbied them through city council,” local pastor Reverend Miles Collier reports. ”We said these prayer booths are not just for Christians, but for any person to take a break to close their eyes, ask out loud for what they need in life and just take a break from it all. It is like having a free counseling session.”

The account is confirmed by media outlets as varied as Democratic Underground, Mediabistro, and India Today, if by “confirmed” you mean “copied.”

Unsurprisingly, the whole thing is actually a windup by an also-ran satirist named Haywood Bynum III. I confirmed his account was fake by calling a couple of journalists at the Kansas City Star, who had never heard of the prayer booth initiative. Next, I spoke with Bill Hurrelbrink, a spokesman in the Kansas City mayor’s office, who checked with the local planning and zoning board. The word is no: these booths do not actually exist.

Except … as a unique art installation by New York-educated, Missouri-based Dylan Mortimer. He created it in 2003 and has since shown it around the country (though never in Kansas City, KS).

Talking with Dylan today was a lot of fun, especially when he invited me to look at some of his other work online. Turns out that most of his pieces straddle the same line between religious piety and gentle absurdity that the prayer booth does. 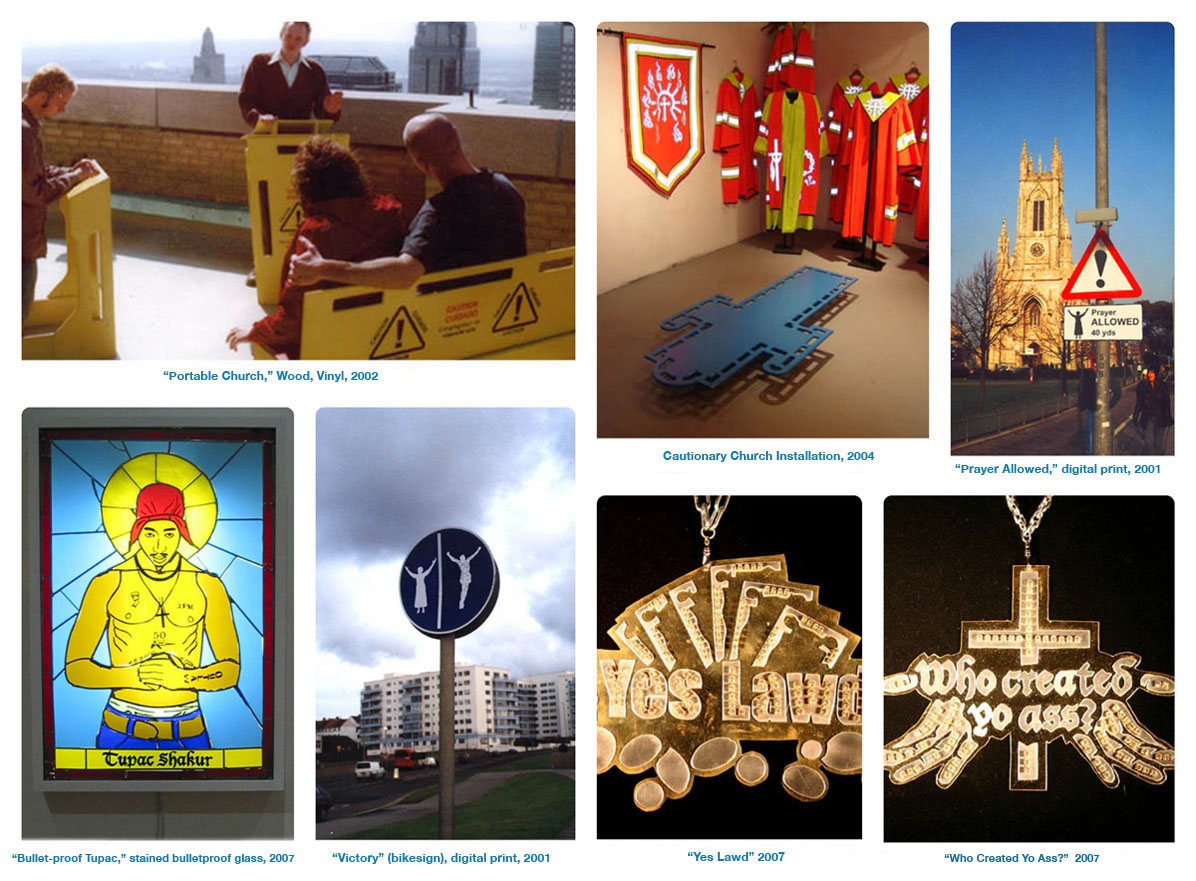 Next, take a look at these giant halos that are currently on display at the Nerman Museum (they activate by motion sensor once you stand close to them): 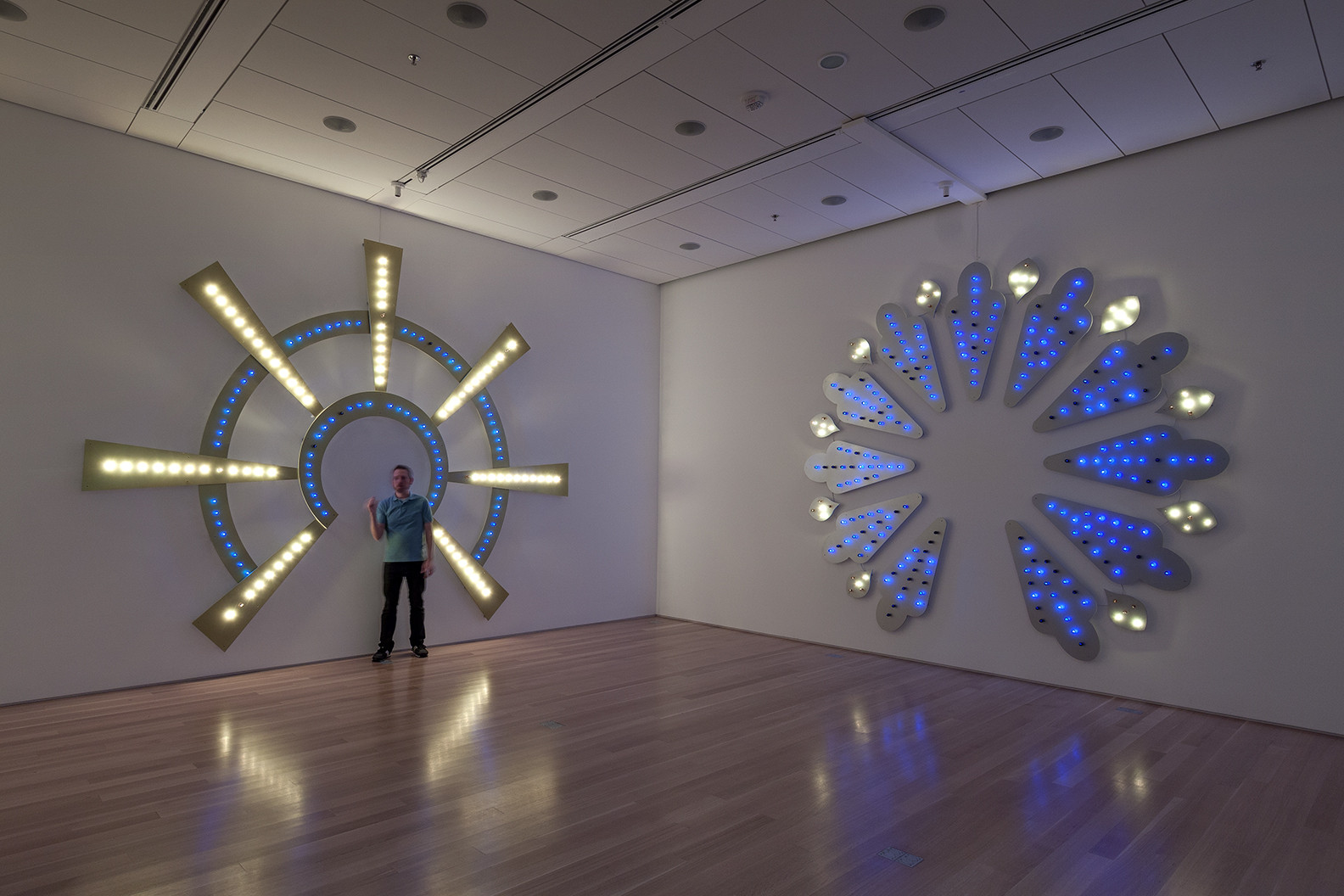 Dylan doesn’t mind that his work — most of it tinged with subtle humor — creates lots of ambiguity and strong reactions. You can never quite tell if his pieces go for reverence or irreverence. In a way, that’s the point. The downside to the deliberately mixed message, though, is that he’s been the target of some venomous verbal attacks, and he’s even received death threats — from both sides of the spectrum.

“Especially the prayer booth, when it’s been out in public, always got lots of people going,” he told me. “I’d hear from religious believers who assumed that I was some liberal mocking their faith, and then I’d hear from people with no religious faith who were angry to encounter the booth on a public street where they assumed it had been paid for with tax dollars, even though that wasn’t true. I guess I’m an equal-opportunity offender. The idea is just to raise discussion of things we wouldn’t otherwise talk about, good or bad. ”

He takes the negative comments in stride. “It’s messy to talk about religion in the public sphere, but it’s a conversation worth having” — and doubly so if viewers of his work suggest new meanings to him. “I’m happy for people to see anything in my work that comes to them,” Dylan went on. “Someone asked me if the fact that the prayer booth looks like a phone booth was a comment on how phone booths have mostly disappeared, and how public prayer has too. I’d never thought of it that way, so it wasn’t the significance I attached to it, but it’s an interesting and valid viewpoint.”

We talked about how the presumed background of the artist often colors viewers’ perception of the art. If any of Dylan’s pieces had been made by Andres Serrano, of Piss Christ fame, it would probably be seen an an outright attack on faith. If the maker had instead been someone like Kiki Smith, who very much self-identifies as spiritual, the same works would most likely be considered respectful if not sacrosanct.

If you know nothing else about Dylan Mortimer, what does his art do for you? Are you captivated by it… and if so, why?

Now for the reveal:

Dylan is, in fact, a Christian. More than that, when he’s not creating art, he’s the pastor of the small Rivercity Community Church in Kansas City, Missouri, an evangelical ministry “for people who don’t like church.”

Did that flip your view of his art?