Responding to Near Fatal Act of Self-Sacrifice, Christians Get Pissed Off Over a Lowercase Letter December 5, 2013 Terry Firma

Responding to Near Fatal Act of Self-Sacrifice, Christians Get Pissed Off Over a Lowercase Letter

In an interview series called “Kind World,” on “kindness and the profound effect that one act can have on our lives,” NPR in Boston broadcast the moving story of a man who sacrificed himself for a near-stranger. It’s the case of sky-diving instructor David Hartsock who, while strapped to his new student, Shirley Dygert, experienced an almost fatal equipment failure when the duo’s parachute didn’t properly deploy. To cushion Dygert’s fall, Hartsock managed to maneuver his body under hers just before the bone-shattering impact. They both lived, but Hartsock is now a quadriplegic.

Here’s the partial transcript of the show:

Dygert: I thought about my mom, I thought about my kids. My kids and my grand-kids — three grandchildren — and my husband and my other son were on the ground watching this. And I just said, god, I didn’t want them to have to see this. …

Hartsock: Knowing that her two sons and her husband could see their mother and wife spinning into the ground, thinking, “Oh my god, she’s going to be dead.” And I wasn’t going to let that happen no matter what.

Neither Hartsock nor Dygert expressed any outright religious sentiments, though both used the word “god” in an exclamatory way, as I probably do a half dozen times a day.

That’s “god” with a lowercase g. 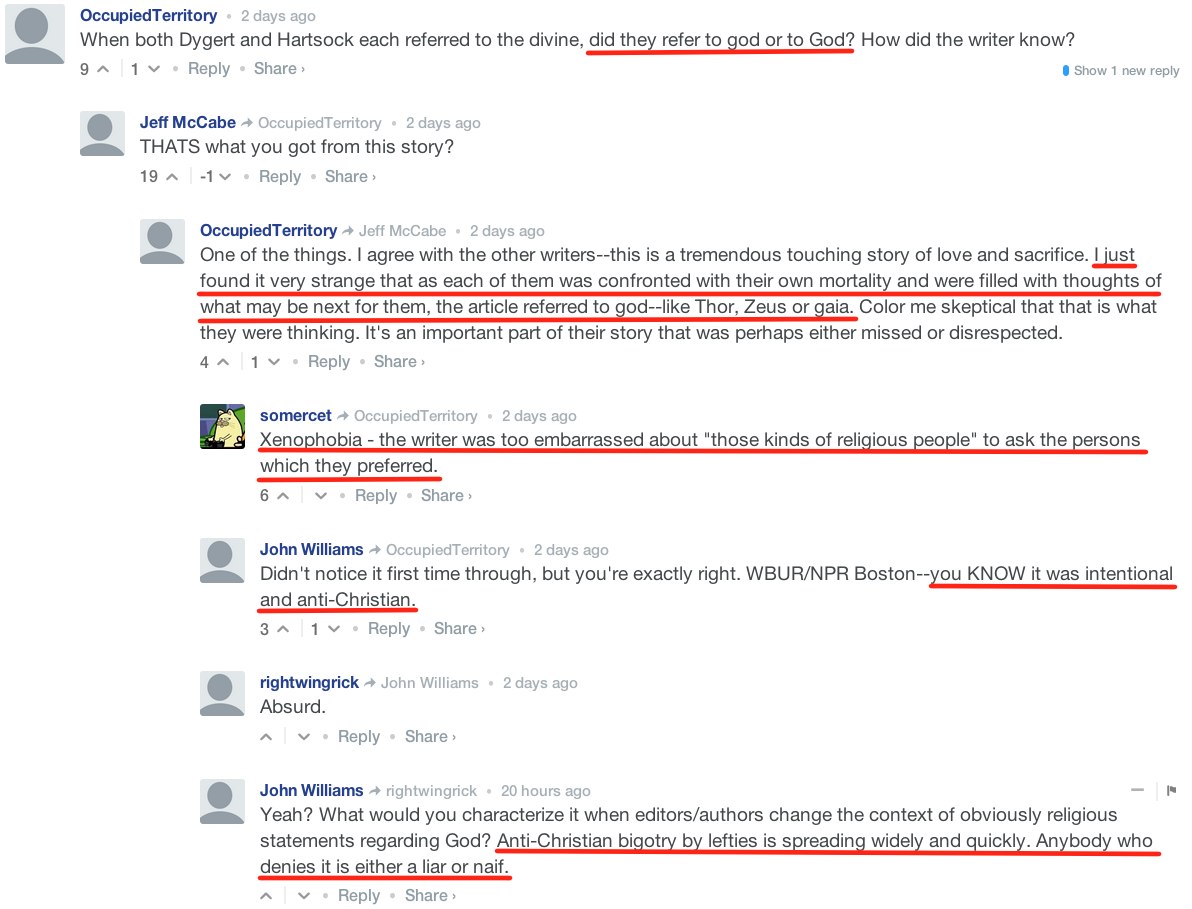 Not capitalizing “god,” even when the word is used in a non-religious or ambiguous context, is now “intentional anti-Christian bigotry by lefties.” If you don’t see it that way, you’re a “liar” or “naif” (sic). You might even be a “xenophobe,” although I somehow have this weird impression that that word doesn’t mean what commenter sommercet thinks it means.

Oy. Christians taking grave offense over a lowercase letter in a text about unselfishness and grace. I don’t think they‘d appreciate the irony, but it’s probably plain as day to everybody else.

December 5, 2013
Why Is David Barton Lying and Saying Obama Didn't Mention God in His Thanksgiving Proclamation?
Next Post

December 5, 2013 Carol of the Bells (Flying Spaghetti Monster Edition)
Browse Our Archives
What Are Your Thoughts?leave a comment