Perhaps in response to a lot of the stories about Christians who refuse to tip their servers because it’s Sunday or because they’re gay or because they feel it’s immoral, an anonymous person (or persons) is going around the country leaving incredible tips with the identifier @TipsForJesus (which is thankfully not part of some pro-circumcision movement): 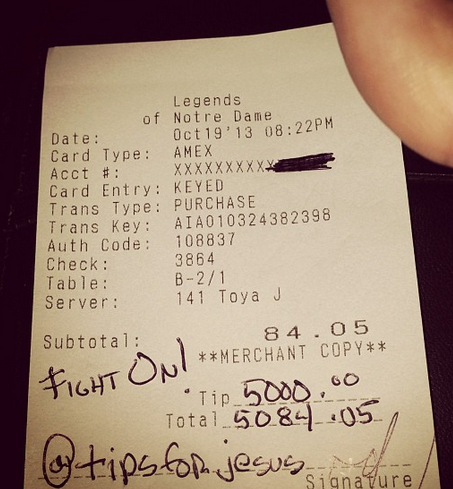 So who is this mysterious spender? A sports star? An Internet billionaire? A really hungry fellow who’s taking the Secret Santa thing to the max? USA Today reported that the restaurants in question have not identified the card user or users.

The clues are few, but here they are:

Mr. Spender is said to be a young man, possibly in his 30s. He’s often accompanied by two or more friends or associates. Anecdotal evidence suggests that they live in California. He carries that American Express card, apparently an exclusive black Amex “Centurion” card, which is issued only to high rollers and must be getting pretty well worn by now.

I love the move as a reaction to the bad Christian tippers out there. Way to lead a movement. It’s too early to tell, however, if his actions are inspiring other Christians to leave normal tips. Not to downplay this guy’s generosity, but this would be a *far* more powerful movement if Christians around the country started leaving slightly-more-than-20% tips — all using the #TipsForJesus tag.

For now, the stereotype of bad Christian tippers is still intact, but this is a (huge) step toward changing that.

December 4, 2013
Man Survives Shipwreck; He and News Media Play It As a Bona Fide Miracle, Despite the Death of His 11 Colleagues
Next Post

December 4, 2013 After Years of Calling It a 'Holiday Tree,' Rhode Island Governor Reverses Course
Browse Our Archives
What Are Your Thoughts?leave a comment