Check Out How a Fox News Reporter Spins This Story About a School District ‘Confiscating’ Holiday Cards December 4, 2013 Hemant Mehta

Todd Starnes, the Fox News commentator who frequently spins stories to raise the ire of fellow conservatives, has done it again with a tale about a Georgia elementary school that “confiscates Christmas cards.”

Here’s Starnes’ version of the story: 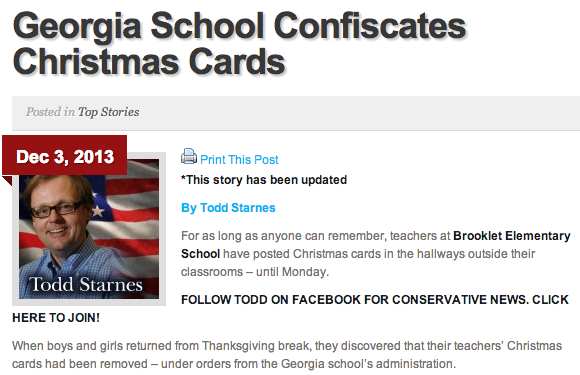 For as long as anyone can remember, teachers at Brooklet Elementary School have posted Christmas cards in the hallways outside their classrooms — until Monday.

When boys and girls returned from Thanksgiving break, they discovered that their teachers’ Christmas cards had been removed — under orders from the Georgia school’s administration.

Robb Kicklighter’s wife is a third grade teacher at the school. He said many teachers are disgruntled by the school’s decision to confiscate the Christmas cards.

“They took down the cards so the kids can’t see them,” he told me. “Some of the cards had the word ‘Christmas’ and some had Nativity scenes.”

Assuming that the display of cards wasn’t just limited to those professing faith in Jesus, why would the display be a big deal?

He didn’t even bother to ask the administration why the display was moved. Instead, it seems, he just worked from the uninformed version of the story told to him by people like Kicklighter.

He was wrong about the cards being removed. They were just moved.

He was wrong about the reason for that having anything to do with the word “Christmas” or images of Nativity scenes.

The guy he quoted was wrong when he said the cards were taken down “so the kids can’t see them.”

Here’s what actually happened according to a press release from the school district:

Fox News Radio Commentary Host Todd Starnes, acting on misinformation that neither he, nor his media outlet corroborated with the school system or [Principal Marlin] Baker, misreported a story about student Christmas Cards being removed from the school. Baker did not receive any questions from the local community either.

It has been a faculty tradition to post the cards on a small display board made of two pieces of red and green poster paper. The display in the past was posted in hallway outside the office workroom.

This year, due to a legitimate, personal privacy concern raised by one of the school’s staff members, Baker moved the display to the opposite wall inside the office work room so that the staff member could still participate in the tradition. Baker wanted to respect the staff member’s privacy and that of his/her children depicted in the Christmas card.

So there you go. There’s the truth behind what happened. Starnes owes everybody an apology right?

(I know, I know, I couldn’t even write that with a straight face.)

Despite the press release, Starnes hasn’t changed his story. The headline still says “Georgia School Confiscates Christmas Cards.” Though, ironically, he added a paragraph at the end quoting the district’s superintendent referring to Starnes’ spreading of bad information:

“We don’t want this misinformation to derail the positive work we are committed to with our community leaders,” Supt. Charles Wilson said in a prepared statement. “I’m appalled by this attack on our school system, and on Brooklet Elementary.”

It’s not surprising that teachers in the school would immediately jump to the conclusion that their religious rights were being taken away. On Monday, an impromptu school board meeting was held to discuss employees’ overzealous religious expression:

The superintendent said he felt the statement was necessary because a reminder he made to principals last month caused confusion about what can and can’t be done in the public school classroom, and why, regarding religion.

[Superintendent Charles] Wilson informed principals during an administrative meeting last month that teachers are not to include Scriptures in signature lines of emails from school board accounts or post religious items and Scripture in classrooms or on desks; and stated that they must act neutrally by not giving speeches or endorsing any religion through leading prayers.

Wilson did this after the Board of Education received correspondence from Americans United for Separation of Church and State, which received complaints from a parent that said teachers were taking part in prayers after high school football games.

That pretty much sets the scene, doesn’t it? These teachers are used to overstepping their boundaries and they only now got called out on it. When the administrators, doing the right thing, told them to stop breaking the law, they interpreted that as “OUR FREEDOMS ARE BEING TAKEN AWAY!”

No. Nothing was taken away. Those teachers are under the same rules as everybody else. But when you’re used to speeding all the time, you get pissed off when a cop pulls you over even though he’s well within his right to do so.

Seriously, the school board’s reminder to staffers of what is and is not legal reads like a children’s book, as if adult teachers have to be reminded not to include Bible verses in their school-related emails.

Already, though, a Facebook group has begun so that people can whine about the injustice of having to follow the law. They started a petition, too:

We, the citizens of Bulloch County, believe that our civil liberties have been infringed upon as a result of the Board Of Education’s guidelines in religious expression as follows: Teachers are required to remove scripture from the signature line in their email. Teachers are not allowed to have any religious items or scripture posted in their classrooms, on their desks, or on their computers. Teachers are required to remove themselves from student-led prayers.

We believe that these activities are not in violation of the Establishment Clause of the First Amendment as long as they are a form of private expression and not an attempt to indoctrinate or instill beliefs in students.

That’s from their official petition. These people don’t understand the constitutional concerns with putting Bible verses in their work email signature lines, posting scripture in their classrooms, or taking part in student-led prayers (presumably during the school day).

They’re a lost cause. And when you have the blind leading the blind, it’s no surprise that Starnes was all too eager to share their story without doing even a bit of research to confirm what they were saying.

(Thanks to Wesley for the link)

December 4, 2013
When Even Christian Publications Suggest That a Celebrity Pastor Is Acting Shady, That Can't Be a Good Sign
Next Post

December 4, 2013 Senator Mark Pryor's Latest Campaign Ad is All About How Much He Loves the Bible
Browse Our Archives
What Are Your Thoughts?leave a comment