After Years of Calling It a ‘Holiday Tree,’ Rhode Island Governor Reverses Course

For the past two years, he called the blue spruce erected in the State House a “holiday tree” instead of a “Christmas tree.” 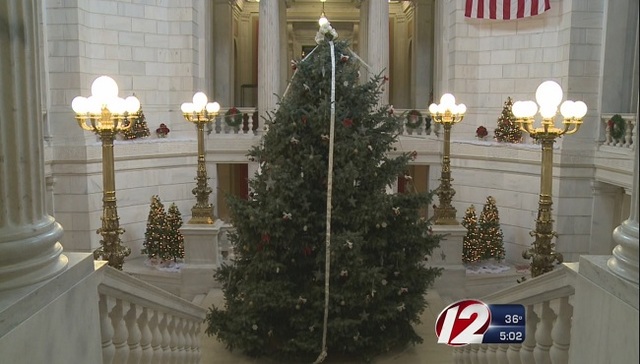 He had good reason for it:

… Chafee, an independent, said the term is in keeping with the state’s founding as a sanctuary of religious tolerance and pointed to the text of Rhode Island’s Royal Charter of 1663.

Chafee also said the State House is public building paid for by Rhode Islanders of all faiths.

Way to not exclude non-religious citizens!

But after years of taking a beating from conservative groups and Fox News Channel, I guess that whole “religious tolerance” bit is a thing of the past.

Chafee has surrendered to the populists and is now calling it a “Christmas tree”:

“Despite the myriad of pressing issues facing Rhode Island and the nation, this presumably happy event became a focal point for too much anger,” Chafee said. “Because I do not think how we address the State House tree affects our ‘lively experiment,’ this year’s invitation calls the tree a Christmas tree.”

It’s not like this is something I’m losing sleep over, and Chafee rightly says he has more important things to worry about right now, but to “fix” a problem that never really existed is just disappointing. (Couldn’t he at least have been a better politician and traded the symbolic gesture to conservatives for something actually worthwhile, like, you know, a higher minimum wage?)

Maybe it would be easier for everyone if they just removed the tree from the State House completely.

(Thanks to Kim for the link)