Max Lucado is a Texas preacher and writer with 80 million books in print, including Just Like Jesus and When God Whispers Your Name.

Rick Santorum is the über-Catholic former Senator from Pennsylvania who, after losing his bid for re-election in 2006, made a failed presidential run, and then announced he would start a film company to make good old-fashioned, pro-Christian, family-friendly fare. He’s on record as calling Hollywood “the devil’s playground.”

Let’s see if these two were made for each other. (No, not that way.) Santorum produced a treacly Hallmark-meets-Dickens period movie, in theaters now, based on Lucado’s The Christmas Candle. 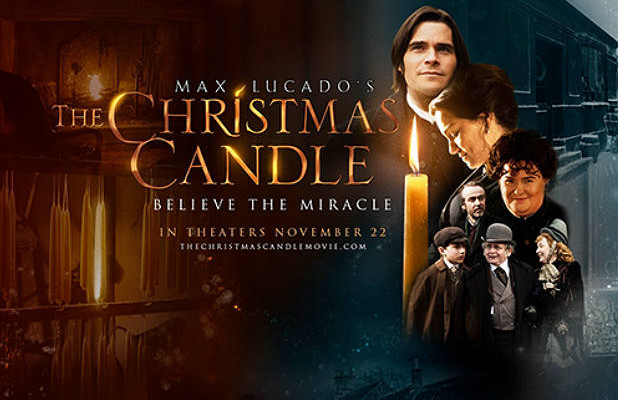 The critics have shown themselves somewhere between lukewarm and ice cold.

Despite some fine production values, lovely photography and smart casting of a range of British stage and screen actors, “The Christmas Candle” can’t quite move beyond the weary metaphors. It has the feel of a slick television movie.

Randy Cordova in the Arizona Republic:

The whole thing is sentimental corn, which isn’t bad if it’s handled with conviction and sincerity. But the direction by John Stephenson (better known for special effects than directing) is resolutely stiff and hollow. That’s murder for a movie dealing with miracles.

Louis Black in the Austin Chronicle:

A confused mishmash of testaments to the importance of good acts and neighborly actions vs. the power of blind spiritual faith, The Christmas Candle comes out in favor of them all.

The residents of the English village Gladbury … might as well be bustling about in a snow globe for all their dimples, yuletide obsession and quaint, consumptive coughs.

But the best, laugh-out-loud-funny line about the Christmas Candle came from a YouTube commenter, WildwoodClaire1, who opined:

The target demographic for this cinematic ipecac appears to be those among us who consider electricity dangerously modern, if not a radical harbinger of rampant atheism.

Of course, none of this matters to Santorum, who would like to bypass the “elitist” media and create a grassroots, word-of-mouth audience of legions of enthusiastic Christians. Has he succeeded?

According to Box Office Mojo, from its limited November 15 premiere through this past Sunday, The Christmas Candle grossed a dismal $1,600,000, despite the fact that the release was timed to cash in on the two big movie-going weekends around Thanksgiving. More than three dozen U.S. theaters dropped the film after just one full week, which helped push down ticket sales in weekend three by 53.5 percent over sales in weekend two. Absent a divine miracle, that means it will be a dud of rarely-seen proportions.

Color me surprised. I mean, if the name Santorum doesn’t conjure up frolicsome adventurousness and breathless joy, I don’t know what will.

December 3, 2013
We Raised More Than $3,000 for the Morton Grove Park District and They Rejected It
Next Post