I don’t know much about the origin of this video that I just came across. Boasting unusually high production values, it’s a slick propaganda piece that was (re?)posted a year ago by YouTube user IndiaEternal under the title “Pakistan MUST watch this video to respect HINDUISM.” But the content is much broader than the old India-Pakistan conflict, addressing the need for religious tolerance across the world.

In the end, oddly, the video doesn’t place the blame for religious strife on believers and their never-ending wars over whose God is better, but instead focuses on godless people like you and me who stubbornly stand in the way of world peace. And it does so by impugning secular higher education with an increasingly popular religious trope: that of an atheist college professor whose God-loving students end up teaching him a lesson. 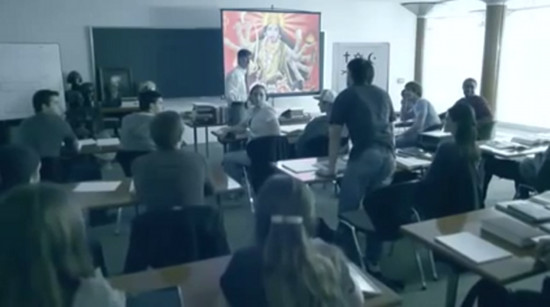 The story line goes like this: A shy Hindu seeker, a young woman, takes a class with an angry white college professor (1:41), who is shown to be spiritually confused as he despondently scrawls a big question mark on a notepad when his hifalutin books stop making sense to him (2:55). Enraged by his own faltering rationality, he is seen belittling Hinduism by showing his class a silly cartoon of the goddess Shakti (1:50); later, he insults additional religions by tearing down sheets of paper with religious symbols and tossing them on the floor (3:40).

Then he makes it personal. With a nasty scowl, the professor fixes his stare on the bindi of the Hindu student, deciding to shine his laser pointer between her eyes to mockingly match up his red dot with hers, as if he’s a deadly sniper who wants to blow her brains out (3:17). Cut to a Christian classmate of the Hindu student who slams a fist on his desk and jumps to his feet in righteous anger (see the image above) to demand the atheist professor stop his abuse (4:02). Other pupils then also rise to defy the godless bully. Side note: In the background, we see a copy of Christopher Hitchens‘ The Portable Atheist (4:12), one of the professor’s putative sources of inspiration.

Note how throughout the video, religious people and their rituals are literally shown in warm, golden tones. By contrast, the academic environment is depicted in pale, joyless blues and greens.

If the message of the video is as it seems on the surface — live and let live, different strokes for different folks — no argument here. But of course, the makers utterly fail to extend that proposed courtesy to “mechanists and materialists” (proxy words for non-theists).

The five-minute production is also out of touch with reality because it places the blame for worldwide sectarian violence and religious wars on non-believers like the professor in his classroom, rather than on the seething masses of murderous–but–pious yahoos whose beliefs we are called upon to respect.

The dishonesty further oozes from a throwaway scene (3:47), unconnected to the professor-student plot line, that shows a dejected-looking young man in a prison cell while the voiceover intones

Men without faith are a pretty sorry lot.

As we know, this effort to connect atheists with violent/criminal behavior falls spectacularly flat. Hemant unveiled in a recent post that, among U.S. inmates willing to divulge their religious affiliation, atheists make up just 0.07 percent of the prison population, a much smaller contingent than the percentage of atheists in the U.S. population at large.

Asking for tolerance is like extolling the beauty of orchids. Anyone can do it and no one is ever opposed. Consequently, it’s easy to make feel-good videos about the need for respect and cooperation, as long as we carefully stay on the surface and say the T-word over and over, like a magic incantation.

I do hope the makers of the little film above will forgive me for tuning out when, while they plead their case, they engage in the exact excoriation of otherness that they so devoutly claim to abhor.

December 2, 2013
Xmas or Christmas? One Preacher Sounds Off, and It's Not What You Think
Next Post

December 2, 2013 Sunday Marks the Opening of The Humanist Hub, a Central Gathering Spot for Atheists in Boston
Browse Our Archives
What Are Your Thoughts?leave a comment