Considering that one of the common criticisms people have of churches in general is that they’re all about taking your money, you’d think pastors would at least try to be subtle in how they ask for it. You know, pass around collection plates while talking about something else. Or maybe leave boxes in the back of the church where people can discreetly drop money in as they leave.

They’re not just asking for money; they’re asking people who haven’t tithed in the past six months to start doing it again while offering a 90-day money-back guarantee if God doesn’t reward them as a result. 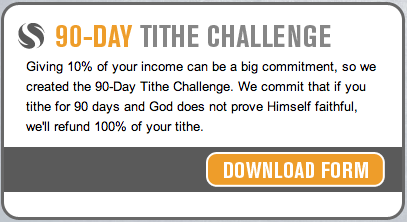 Here’s how this works.

You give the church 10% of your income. After 90 days, if God hasn’t rewarded you and shown His “faithfulness,” you are eligible to get a complete refund.

I guess no one at the church ever read Matthew 4:7:

Jesus answered him, “It is also written: ‘Do not put the Lord your God to the test.’”

Jesus answered, “It is said: ‘Do not put the Lord your God to the test.’”

Do not put the Lord your God to the test as you did at Massah.

That aside, so many questions to ask…

If you doubt that God will reward you, you’re better off just not giving Sagebrush any money and saving yourself the hassle of the contract. If you support the church, then you don’t need the contract.

This is a win-win for the church, since they obviously don’t care about public perception. At worst, they refund people their money and get right back to where they started since those people hadn’t been tithing, anyway. At best, they get thousands of dollars per tither that they weren’t getting before.

Sure, they just contribute to the already-nasty stereotype so many people have of Christian churches, but MONEYS!

All that said, at least the pastors at Sagebrush aren’t as bad as Pastor Ed Young, who once told his congregation to flat-out hand over their checking account and bank routing numbers, so he could pay for things like a private jet:

November 30, 2013
Is This Canadian Politician Slamming Atheists in an Informal Holiday Greeting?
Next Post