Board of Education May Vote to Put ‘In God We Trust’ on an Elementary School’s Welcome Sign November 29, 2013 Hemant Mehta

If you were to visit Pine River Elementary School in Leroy, Michigan, you would see this sign in front of the building: 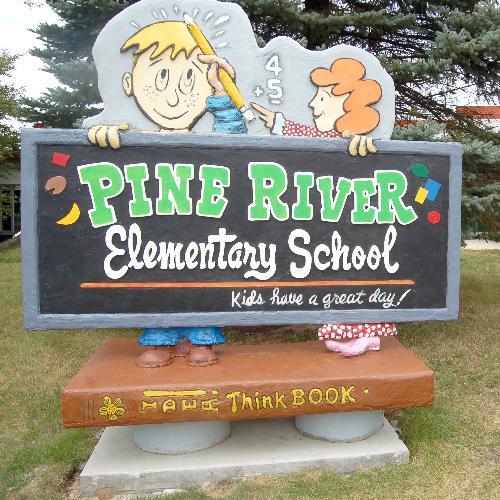 I have a couple of issues with that sign… do adults who work there also have a great day, or just the kids? And what exactly is the name of that book? It’s like they were trying to cram buzzwords on its spine. Idea! Think! Book! But those are minor issues. It’s a cute sign that I’m sure serves some purpose.

It actually went up earlier this year when the other two elementary schools in the district shut down and the remaining school was renamed and given a bit of a makeover. This sign helped inaugurate the new building.

But when LeRoy High School Class of 1943 graduate Carl Gustafson made the sign, the spine of the book had another phrase on it: “In God We Trust.”

Pine River Superintendent Jim Ganger said the sign was put up in early July, and shortly after, there were some concerns brought to the attention of the district by several members of the community. While there were not “tons” of concerns expressed, Ganger said there were enough that the school board made the decision to remove the “In God We Trust” phrase from the sign.

Smart move. Earlier this week, however, there was a meeting to discuss the sign. All the residents who spoke at the meeting supported the phrase. And now the board of education may be reconsidering the superintendent’s decision:

During discussion about the sign at a school board workshop Monday, nine people weighed in on the subject, and all shared the same sentiment: They all felt the board should take a stand and return the sign to its original form, which included the motto on its lower right.

Though the phrase was removed during the summer, details about the motto’s removal only recently came to light. After the board of education received complaints from a number of people, it appears likely the board will vote to return the motto to the sign.

Board member Allen Peterson said his only concern with putting the motto back on the sign was how many kids it would cause to leave the district.

Although no decision was made at the workshop, and two board members, Denise Brock and Merrylie Hayes, were absent, it appeared the board was ready to approve returning the motto to the sign at its December meeting.

The Pine River board is scheduled to meet at 6 p.m. on Dec. 9 in the high school/middle school media center.

No one’s going to move out of town if the phrase is there or not there. But here’s a better question: How much money is the board willing to waste on a lawsuit? Because there will be legal action if they add the godly phrase back on there. The only reason it would be there is to push the Christian faith onto the students in as subtle a way as possible — and letters to board members telling them they’re “working for Satan” by keeping the phrase off the sign don’t help.

Ganger had the good sense to take off the words over the summer. If he caves now, though, he’ll be hurting an already aching district. Let him know he needs to stay strong and keep the words off the sign by contacting him at 231-829-3141 (Option 1).

November 29, 2013
Christian B&B Owners Who Turned Away Gay Couple Claim to Want Only "Freedom and Tolerance"
Next Post